A Hero This City Needs: “The Batman” Review

The thought everyone had after watching "The Batman" 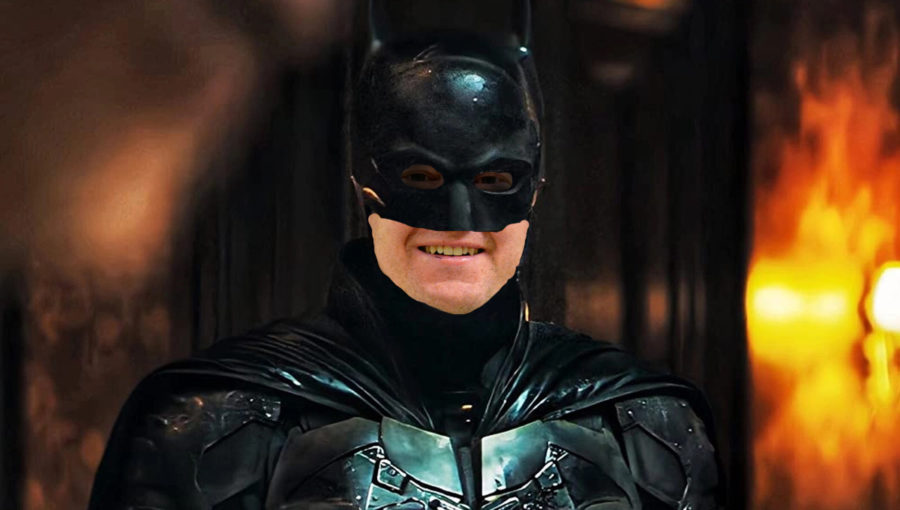 March 31st, 2022. The school’s halls are crowded for a school day. Hidden in the chaos is the element, waiting to strike like snakes. And I’m there too. Watching. Four years of high school have turned me into a nocturnal animal. I must choose my targets carefully. It’s a big school. I can’t be everywhere. But they don’t know where I am. We have a signal now, for when I’m needed. When that light hits the sky, it’s not just a call—it’s a warning. To them. Fear is a tool. They think I’m hiding in the shadows, but I AM the shadows. I wish I could say I’m making a difference, but I don’t know. Vaping, stealing, skipping classes: four years later they’re still going up. The school’s eating itself. Maybe it can’t be saved, but I have to try. Push myself. These school days roll together in a rush, behind the mask. Sometimes at night I have to force myself to remember everything that happened.

The first part of this review will be spoiler-free.

For years, I’ve been an avid Batman fan, consuming every media the Caped Crusader has graced the screen of. That being said, I can say for sure that “The Batman” is the best movie I have ever seen. Most movies DC produces try to be too ambitious, introducing too many characters too quickly, plus they typically start their Batman off already old. I mean, I like old Batman, but I would love to see a young Batman interact with Superman. The Justice League should have been much much later in the DCEU. They struggle to make it seem like these characters have been established in their respected universes. Yet “The Batman” did it beautifully. “The Batman,” unlike almost every Batman movie that starts in Year One, takes place during Batman’s second year of protecting Gotham. It was perfectly grounded: in this movie, GCPD still wasn’t sure about Batman and him helping them solve the case. They still feared him and weren’t sure what he was capable of.

The villains in this movie were also some of the most comic-accurate villains I’ve ever seen in a comic book movie. The Riddler was actually scary, a stark difference from Jim Carrey’s buffoonery in 1995’s “Batman Forever.” This Riddler wanted to get caught, which is why he kept leaving riddles. He was legitimately insane. As for the Penguin, he was extremely fleshed out and was kept fresh the entire movie. Not once did the Penguin bore me as he did in Tim Burton’s 1992 classic “Batman Returns,” where the Penguin was cool and exciting yet also kind of boring.  The car chase sequence between Penguin and Batman was one of my favorite scenes from any movie. Penguin was like a small crime boss, who didn’t really care about crime itself, just the paycheck. The villains really made this movie stand out.

The tone of the movie also took the cake for me. It was dark and gritty, and almost every scene had rain in it. Compared to Christopher Nolan’s “Batman Begins,” both are these dark movies yet in Nolan’s films Gotham looked clean. There wasn’t that much crime, and the city looked kept up. However, to me, Gotham should be like NYC but dirty. It should look like crime occurs every night there. “The Batman” had some serious scenes of violence and really was ambitious in terms of being dark by adding some of the scenes where Batman literally ruins a goon’s face. There were few moments where the movie was light-hearted, and most jokes came from irony, mainly the Riddler acting like a psychopath.

The majority of the movie isn’t a typical superhero movie; instead you’ll find a detective movie. I really enjoyed how this had so many similarities to two of Batman’s greatest comics: “Batman Year One” and “The Long Halloween.” Both of these are gritty detective comics where Batman is pushed to his limit. Seeing most of these amazing stories come out and seeing the similarities, to a comic book fan like me, was amazing. I loved watching Batman solving the Riddler’s riddles with ease, as GCPD kept struggling with them. This Batman is one of the most comic-accurate Batmen. He didn’t crack jokes, he was serious, and he actually seemed like he had a brain. His suit was comic-accurate: it was bullet proof, and he was able to hide in the shadows and move around. It’s rare now-a-days for a Batman to be feared by criminals but revered by the citizens, yet this movie portrayed this SO well. The Riddler was truly captivating in this role; he was very similar to the Zodiac Killer. He was ruthless, and his riddles were sometimes legitimately terrifying at some moments (e.g. the “thumb drive,” for those who have seen the movie.). In the comics, Riddler was always a C-List villain until Jim Carrey pushed him into the public’s eye again. Most of Batman’s best series in the comics now involve the Riddler, and it’s amazing! The Riddler is one of my favorite rogues from Batman’s rogue gallery.

My hopes for the next movie is that it keeps Bruce on his toes, perhaps with the “Court of Owls” and Deathstroke. I feel like now that Bruce thinks the city is clean of all the corruption, the Court of Owls will try to recruit Bruce, who survived the Riddler’s attack, while he’s financing the repair of Gotham. Batman has to uncover their corruption when they hire Deathstroke, who in the comics can go toe-to- toe with the entire Justice League and come out on top. This Batman has never had a real challenge before, so I feel like him having to go up against the most deadly assassin would make for a really good movie. In the next movie as well, they should have little Easter eggs like the Arkham games do, such as Batman getting Venom from Bane, Batman stopping Killer Moth and Man-Bat from causing chaos, or even Batman fighting Killer Croc in the flooded city. Matt Reeves has truly proved himself as one of the best directors for Batman and actually keeping him comic-accurate.