The General Journal • May 16, 2022 • https://hhsgeneraljournal.com/10273/ourheritage/becoming-better-business-leaders-better-people-fbla-spotlight/ 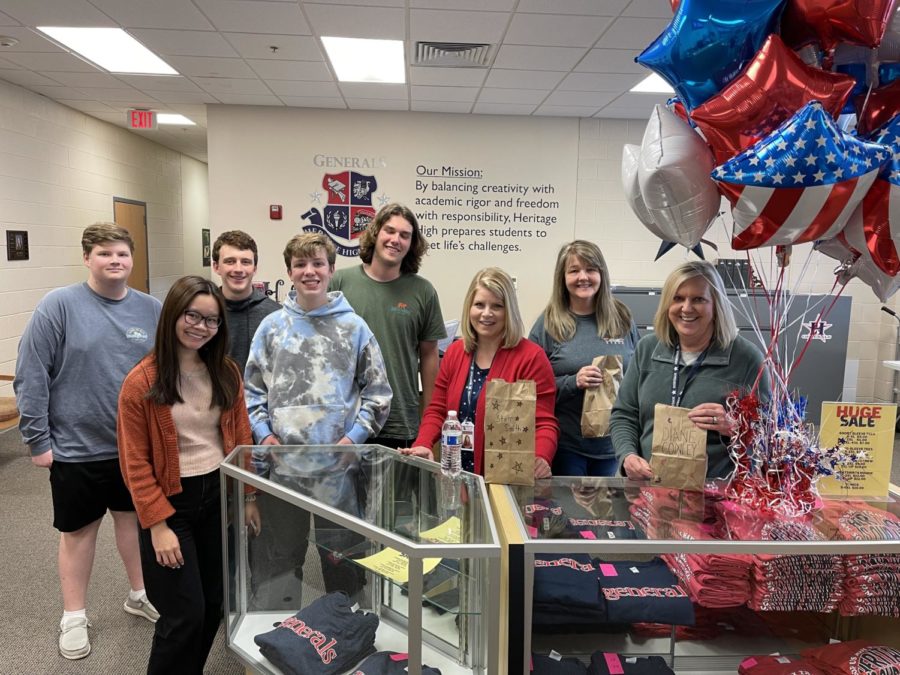 According to Coach Michael Craft, who sponsors FBLA (Future Business Leaders of America) alongside Mrs. Leslie Sawyer, “FBLA inspires and prepares students to become community-minded business leaders in a global society through relevant career preparation and leadership experiences.” In keeping with this goal, Heritage FBLA members took part in and led several different projects to help the school and the broader community, many of which have become annual traditions over the years. In this year’s annual food drive, for instance, members gathered over 2,800 food items and donated them to Heritage families in need and the local food bank. FBLA also showed their appreciation to our local veterans, writing and sending thank you cards to HHS deployed veterans for Veterans Day. FBLA also helped clean up on and around the HHS campus. As a show of appreciation, members also put together and handed out goodie bags to each Support Staff member that worked on-site during FBLA Week and on National Administrative Professionals Day.

This year’s FBLA activities weren’t limited to just service, though. Members also competed at Region and had four Region competitors qualify for State. Donnie Nepp, Nate Trobaugh, and Erin Lin competed in “Personal Finance,” “Digital Video Production,” and “Business Calculations,” respectively. Nepp finished in tenth place, Trobaugh in fourth, and Lin in third. Our “Website Design” team, consisting of Elijah Lankford and Nathan McCoy, placed first and were Region Champions. Our other Region Champion was Emily Lin, who was Vice President of FBLA this year and placed first in “Introduction to Financial Math.” Emily went on to finish in the top 12% at the State competition! Coach Craft highlighted Erin Lin’s contributions to FBLA this year, noting that she “earned the Salutatorian title for HHS and is headed to Princeton University and has been a great role model for FBLA members and the school.” Coach Craft also highlighted Zach Scheeler, who served as President of FBLA this year and has been a four-year member of HHS FBLA. “He has really grown in maturity and leadership while in FBLA,” said Craft.

Despite the fact that FBLA was “not as active as years before Covid,” due to “a number of Covid restrictions at the beginning of the school year,” Coach Craft noted that “as the year went along we were able to provide students a better experience than the year before with Covid.” For Craft, the highlight of working with FBLA this year was “working with co-adviser Ms. Sawyer and helping students start to develop their Leadership Ability and understand the importance of helping others through community service.” Sophomore Elijah Lankford said something similar, remarking that “FBLA has helped me a lot in a sense that it gives me a lot of leadership opportunities that I usually would not get.” With all these projects and activities, members had many to choose from for their favorite. For Elijah, it was “walking in the parade with the Ghostbuster float we made and winning the float competition.” Others like sophomore Nathan McCoy enjoyed helping out faculty in HHS by “giving gift bags to the office staff because it made me feel good to know they felt appreciated.” Looking back at all of these projects, senior Erin Lin said that “FBLA has helped me grow as a student and leader because it’s a smaller club, so we really have to work together as a team to figure out our projects.” McCoy echoed this, saying that students should join FBLA because it provides “good team-building.” Lin noted that it’s also “a great way to meet people who are interested in the same things you are.” Lankford added to this, saying that students should join “because it gives them leadership opportunities and opportunities to help their school and faculty that otherwise wouldn’t be recognized.”