The General Journal • May 16, 2022 • https://hhsgeneraljournal.com/10294/sports/unity-integrity-effort-girls-soccer-season-wrap-up/ 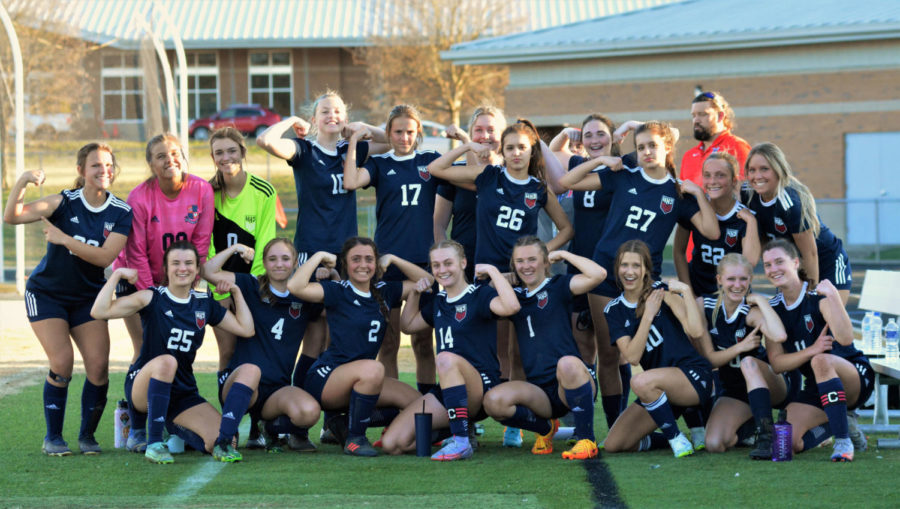 The Heritage High School 2022 Girls soccer team had another outstanding season. Our Lady Generals showed extreme perseverance and determination leading them to end the season in the Elite Eight with a 14-2-1 record. The season began with an incredible winning streak of eleven games, kicking off it with a mercy-rule against Rockmart. Following that was a game against Lakeview (9-0), North Murray (3-0), known local rivals Ringgold (5-0), Woodland (6-0), another excellent mercy-rule against Central Carrollton, and Cartersville (5-0). One significant win was against Pickens with an overall score of 11-1. The Lady Generals kept possession the entire match yet somehow unfortunately gave up the first goal of the season. They didn’t let that stop them however and continued fighting for an easy mercy rule, ending the game at half time. Next the Generals faced their first hard battle, having to work harder than they had all season against Southeast. The team came together, connected passes, and defeated the Raiders (2-1). They secured their winning streak by beating Cedartown (5-0) and Ridgeland (4-0). All these matches lead up to the Region Final against our biggest competition, Northwest. Our game history against Northwest was always pretty tight and this year was no exception. Our girls fought persistently the entire game and pushed themselves until the last second ran on the clock. Sadly, the Generals had their first loss (2-0) making them second in the region. Nonetheless the team picked it up for their next game against Dalton. They tied them 1-1 which was an accomplishment due to the fact that playing Dalton is always a tough challenge. The last game played before state was against Calhoun (1-0). Finally, the Lady Generals started State Playoffs. Their first State game was against Mt. Zion. The Generals went in strong and it paid off with a win of 5-0. The team advanced to the Sweet Sixteen where they traveled to Thomasville GA and played Thomas County. It was yet again another win of 5-0 and was overall the best game the Lady Generals had played all season. The season came to an end as the Generals faced North Oconee, and lost, in the Elite Eight (4-0). Assistant Coach Lauren Peters said, “They played with unity, integrity, and effort, displaying these core values both on and off the soccer field. With the talent we have, we are chasing an ‘elite’ status for this team, so our expectations are high for these girls. While I wish we weren’t eliminated, and our rematch against N Oconee went differently, I am tremendously proud of how this team played, and to be honest, the hardest part of the season being over is that it has been so dang fun.” Coach Terry concurred, noting that “the Generals dominated most matches with their tough athleticism, tremendous skill, and beautiful teamwork.” “As impressive as they were on the field,” said Coach Terry, “the way these girls supported each other off the field is what stands out most to me. Any time a girl was going through some adversity, her teammates were there to offer love, support, and encouragement. That kind of unity, integrity, and effort means more than any soccer match ever could.” Overall, these Generals had a solid season and really grew as a team. This season was definitely one for the books.