LOOKS LIKE PHARRELL & THICKE “GOT TO GIVE IT UP” 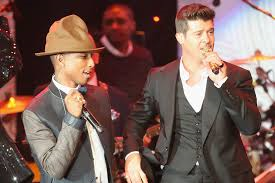 When we think of the word plagiarizing, we generally think of someone who has a paper due and just copies and pastes things off of the Internet into their paper to up the word count. However, we don’t often think of it in music. Recently, there have been several cases of plagiarism in the courts that have to do with musical plagiarism. Often, I really think that it’s unintentional and artists don’t even realize it. If you wanted to, you could compare two completely different songs and probably find some differences. However, some seem to be a little more obvious than others. Here are some of the more recent cases where some went to court and some didn’t.

One of the most recent cases was the one against Robin Thicke and Pharrell for “blatantly ripping off” Marvin Gaye’s “Got to Give it Up” when they wrote the song “Blurred Lines.” The court ruled a few days ago that Pharrell and Thicke must cough up 7.3 million dollars for the Gaye estate.

This next one never went to court, but if it had, I’m pretty sure Bareilles would have won. Katy Perry’s “Roar” sounds an awful lot like Sara Bareilles’ “Brave.” Fans even created a mash-up of the two to show these similarities. While Katy Perry kept quiet, critics waited to see what would happen. Would the two take each other on in court? It didn’t, and the dispute pretty much ended after Bareilles tweeted “All love, everybody. All love.”

We all know and love Sam Smith; I know I do. Recently Smith was charged with stealing Tom Petty’s “Won’t Back Down” and putting it into his song “Stay With Me.” “If someone took my song note-for-note and stole it maliciously, then maybe [I would sue them]. But I don’t believe in lawsuits much. I think there are enough frivolous lawsuits in this country without people fighting over pop songs,” stated Petty. Apparently Petty felt that his song was maliciously stolen, because 12.5% of the song writing credit was given to Tom Petty and his co-writer Jeff Lynne.

So if you’re thinking of becoming a songwriter someday, make sure you’re cautious about it. If not, you may be paying a huge settlement whether you meant to copy or not.