TINY HOUSES? NOT NEW TO ME! 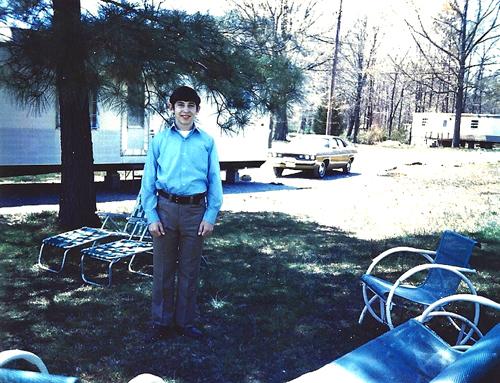 I am often mistaken for a hipster: an old hipster. The telltale signs are there: a beard, black-framed glasses, a stereo system that includes a turntable. Before Brooklyn, New York, became populated with younger, thinner, hipper versions of me, these trappings were just unremarkable, everyday things in my world.

The first time I was away from my parents for an extended period of time was in 1974, the summer between my junior and senior year at Tyner High School. My 11th grade English teacher—who was actually a Spanish teacher forced to teach one unit of English—talked me into begging my parents to let me become a summer exchange student in Venezuela, South America. That’s a whole other story, but the bottom line is that when I was in Venezuela, I grew my beard. Blessed/cursed with somewhat hirsute genes, by the time my folks greeted me upon my return at the Nashville airport, pre-beard scruffiness had given way to a nice face of hair. My parents were okay with it, and I’ve had it ever since.

Years before, when I attended Westview Elementary School, I had the dubious honor of being the only student in the school with bifocal glasses. Not “Four Eyes” . . . “Six Eyes.” My mother, always a fan of thrift and practicality, insisted on sturdy frames, and “fashion” and “thrift and practicality” rarely ran hand-in-hand in the 60s. In the early 90s, I returned to sturdy glasses (with, I must admit, a nod to my upbringing) by using traditional Ray-Ban Wayfarer frames with my prescription lenses, a fashion choice I continue to this day. It was at the time, arguably, post-dork, pre-hipster.

And while vinyl long-playing records (LPs) are all the go right now, I was raised in a world in which they were all that was available to music lovers. They weren’t amazing in any sense; the music was what mattered most. I saw the advent of 8-track tapes (which I pretty much avoided) and cassette tapes (which I dove into head-first), but records (which many now call “vinyls”—“vinyl” is already plural!) were unwieldy, fragile, and given to scratching easily (and I don’t mean in the deejaying sense!). I still enjoy playing my records on my turntable, though now when I want to buy a new record, it usually runs $19.99-$29.99. Not an easy adjustment when back in the late 80s a new release averaged $7.99-$9.99 on vinyl. Yes, I know: new “vinyls” are 180-gram in weight. Apparently vinyl is expensive.

And now a relatively new phenomenon—“tiny houses”—is peaking (or may have already peaked; hipster time can be fluid and ephemeral). If you don’t know what I’m talking about, simply Google “tiny houses” and you will see. Imagine a posh amalgam of woodworking, camping, self-reliance, and perhaps latent Hobbit-love. These (literally) tiny homes are an amazing marriage of aesthetics and engineering. If you’ve ever felt the need to cozy up in your bedroom—or a room of your house—with a good book or foreign film (on Laserdisc, if you’re a hipster) and a cup of small batch, cold-brewed coffee, a tiny house looks very attractive. I imagine it’d work equally well with Disney movies and Froot Loops, too.

I was raised in a trailer. Not a modular home. A trailer. It was a pretty nice trailer: solidly built with formaldehyde-free paneling. But it was a metal box on wheels parked on two acres of land in the just-developing sylvan wilds of East Brainerd. Imagine the Heritage area before the middle school was built. According to my friends at Westview Elementary (and later Tyner Junior and High Schools), I lived in a tiny house. They were fascinated by it, but, for my father, mother, sister (the nine years before she married), and me, it was just “home.”

And while it didn’t have the Hobbit-like charm of a hipster tiny house, it was well-crafted and engineered for maximum use of minimum space. I mean, the full bathroom had a sliding wooden door, not unlike an elevator door. In fact, I used to play “elevator.” We had pretty vivid imaginations back then. I won’t elaborate on the fact that the bathroom door didn’t have a lock. Again, another story for another time. The bedrooms had sliding closet doors, built-in drawers, and headboards that were attached to the wall (Granted, this limited our rearranging the room, but it was pretty clever).

No one I knew had turquoise kitchen appliances (and sinks), either. The stove was gas, and that presented problems the entire time I lived there: our almost certain asphyxiation or immolation. We all learned to “check the burners” each and every single time we passed the stove. That meant testing of all four knobs to make certain they weren’t “on,” however slightly. Apparently the wind of our hips in passing could inch the knobs incrementally toward “on,” the slightly leaking gas could bypass the pilot lights, and we’d all die in our sleep. The pilot lights could have blown out; it wasn’t until nighttime when their tiny blue open flames were visible, reassuring you that you wouldn’t blow-up. Unless, of course, they went out while the pilot light in the oven below remained lit as the slowly leaking gas caused by the neglected burner knobs grew dense enough to finally ignite our tiny house into a conflagration of biblical proportions.

I won’t go into the ramifications of having a gas furnace, lest I digress. I will say, however, that for a brief time, we were pretty cutting-edge in that we had central heat. This was the dawning of the age of the heat pump in Chattanooga, so while many of my friends had exotic basements and second floor rooms, I had heat in the winter that blew out of the floor. And, believe me, in pre-global warming Chattanooga when the winters were quite cold for a long time, blowing heat beat radiant heat every time.

The windows on our trailer were marvels, too. One crank could raise synchronized panes, pagoda-style, to adjustments that would allow full-breeze settings to barely open (what we called “cracking a window,” usually to remedy stuffiness or an unwanted odor). Never mind that as a child I was stricken with short-term carpal tunnel syndrome operating these window cranks; from the outside, the opening of these windows looked almost sci-fi, but what wasn’t seen was the agony of the tiny handle-to-gear ratio that required my herculean effort. The front and back door windows took up ¾ of each door: textured, translucent panes—fifteen or twenty of them—that opened, louver-like (again, with tiny, Keith Richards’ knuckles-inspiring handles).

Did I mention that the four of us lived in a 10’ x 60’ total space? That’s 600 square feet. And while that might be palatial to today’s hipsters (or any New York City apartment dweller), check the square footage of your home today—with an eye on how many sentient beings dwell there—and you’ll see that my childhood home kind of qualifies with the other hipster-before-it-was-hip aspects of my life. I suspect I’ll die with a beard, and as long as Ray-Ban manufactures the original Wayfarer design, I’ll keep my glasses. I just upgraded my turntable, and I’m enjoying my old records for the first time in a long time. And for the past twenty years, I’ve lived in a “vintage” 60s rancher that I’ve lovingly kept as authentic as possible. Not only is it the very type of house my childhood friends grew up in (and I envied), it’s in East Brainerd.