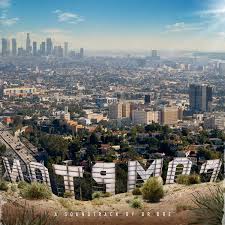 In 1992, Dr. Dre, a former member of influential hip-hop group N.W.A., dropped his first solo album, The Chronic.  It fit its time as a fun record that served as blueprint for the infant genres of G-funk and gangsta rap that would gain popularity in the coming years. Those were pretty different times, though. A record that’s great in retrospect can be more fondly remembered for being groundbreaking at the time, but with years of evolution in hip-hop as genre, would repeating yourself not simply just be redundant? Enter Compton, the brand new surprise record from Dr. Dre. Since The Chronic, Dre has managed to not only release another impressive solo album, but discover the talents of many famous rappers today such as Eminem and Kendrick Lamar. On Compton, Dre aims to show everyone what he’s been doing for sixteen years, but I’m just not convinced that what we were waiting for was all that good.

My most obvious issue with the record has to be the lyrical content. In addition to having a slew of cringe worthy lines strewn about the album, they also just feel ridiculously outdated. Dre sing-raps weakly of dealing with his own success, and his spot in the music industry being exclusively a job with no payoff. If that wasn’t tiring enough, Dre made sure to fit as many pointless marijuana references as he possibly could. Even the features here just seem tired. Kendrick Lamar drops by multiple times on this album, but even his strong flow can’t help him overcome some less than impressive lyrical offerings. An upside to the album is how creative the instrumentals feel. They are very much trap-inspired, but at the same time take elements from the G-funk classics of the nineties. But this short lived, as many of the novelty features and choices made on the album feel wasted, especially Ice Cube’s half-baked horrorcore verse delivery. If there was one feature that I had to single out as being better than the rest, it would have to be Snoop Dogg’s verse. It feels very inspired and has a flow that takes you back to the days of rollin’ down the street and sippin’ on gin and juice.

Overall, Compton is an uninspired return to recording for Dre, and can’t seem to find its niche in the hip-hop industry of today. Its statements on current issues are neither profound nor engaging, and can’t hold a candle to the more cathartic offering by Dre’s own contemporary, Kendrick Lamar.