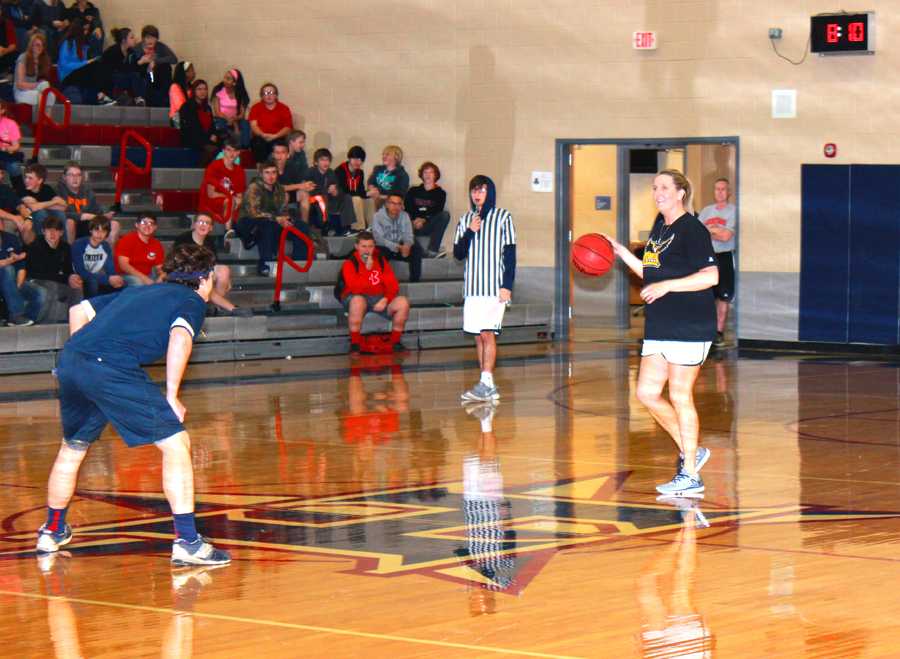 Many of us went to the Student-Faculty Basketball Game yesterday, and boy was it a good game. There were several excellent “athletic moves”–as Coach Broom would call them–such as Trent “Top-Knot” Kiniry landing in the stands after a dive to save the ball, and Coach Bice, also known as “Downtown Bice” for her Curry-esque shooting from beyond the three point line. The game started off with our Digital Tech teacher Mrs. Holly Ware tipping off against a much taller Jordan Goodman, which of course was unsuccessful, but in a miraculous turnover, the teachers had possession of the ball within five seconds of the beginning of the game. The teachers were fluid and coordinated, throwing up an amazing defense and passing game throughout the first half, though their shooting game wasn’t the best, as they mostly relied on Coach Thomas “Tip Toes” Gray and Coach Cooper to score lay-ups, with an amazing spectacle of Gray actually leaving the ground. The students looked absolutely pitiful in the first half, turning the ball over every chance they got and only scoring a measly 9 points against the teachers’ 33. The second half went much more smoothly for the students as they made some incredible athletic moves, and Top-Knot Kiniry actually looked almost athletic. The students ended up scoring another 32 points, but they were still unable to overcome the mighty teachers as they drained several 3’s, largely scored by Downtown Bice and Mrs. Ware. The students came close, but ultimately came up short, losing 49-41 to the teachers. Maybe next year the students will teach the teachers a lesson.