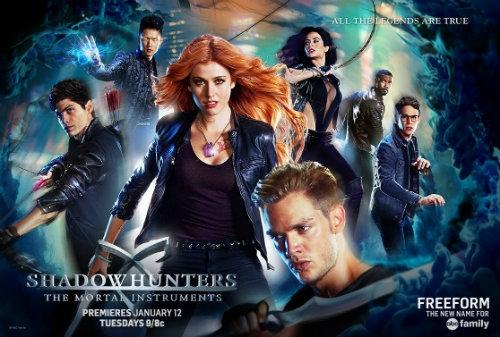 Angels, demons, vampires, and werewolves collide in Freeform’s new series “Shadowhunters.” This is the second adaptation of Cassandra Clare’s acclaimed novel “The Mortal Instruments” after its first failure. Although the former movie adaptation, “City of Bones,” did not receive good reviews, “Shadowhunters” is quite the opposite. It revolves around the fiery redhead Clary Fray as she comes to terms with her true identity, a Shadowhunter. She’s suddenly thrust into this new world of creatures, creatures that she thought were only real in bedtime stories. Overall, I recommend the series. I will say that some of the script can be a bit cheesy at times, and a few of the actors could use a lesson or two; however, the plot is worth the watch. Also worth the watch is the relationship between Shadowhunter Alec Lightwood and warlock Magnus Bane. “Malec” is what many fans claim to watch the show for. Book readers are fairly pleased with the way the relationship is being portrayed and its loyalty to the book. In addition, Alec’s sister Izzy is a character that has drawn fans in from the beginning. She stands as a testament to the fact that girls can kick butt just as well as boys and do it while wearing six-inch heels.  The final episode of Season One aired April 5 and has left many satisfied, but it has also left them with many questions. Fortunately, it has been renewed for a second season which will air early 2017. If you haven’t checked out “Shadowhunters” yet, you have nearly a year to catch up before the series returns.