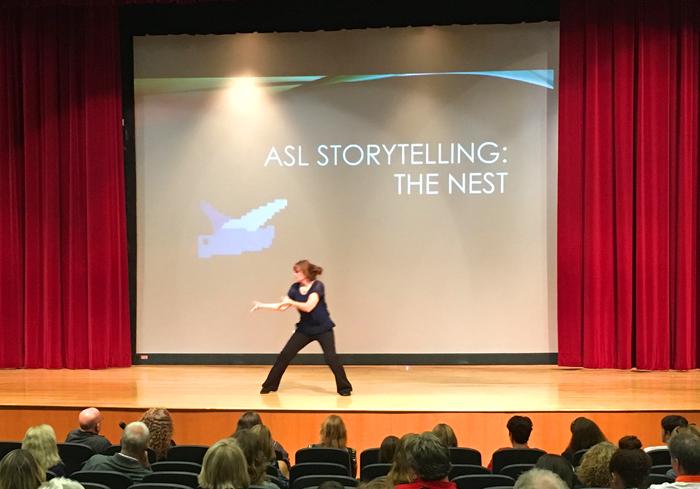 The Heritage High School ASL Honor Society hosted Trix Bruce, a deaf story teller, on September 17. She is a deaf one-woman show storyteller. She has been involved in performing arts since she was in high school. I asked Heritage’s own American Sign Language teacher, Dr. Lisa Godfrey, some questions before the show about Trix Bruce coming and how Dr. Godfrey thought it would turn out. She said that the turnout should be pretty great. They were expecting between 100-150 attendees, and that is also the turnout they got.

Trix Bruce was completely silent, and there was an interpreter for the folks that did not know American Sign Language. I asked Dr. Godfrey what she was expecting, and she told me she was expecting the show to be good. She also wanted the students to be able to interact with local deaf people. Mrs. Godfrey wanted the students to communicate with the deaf and take what they learned in class and transfer it. The ASL Honor Society worked as ushers and at other jobs for the performance. I also spoke to some of the students who were there. I asked what they liked most about the performance, and Gussie Fore said, “I really liked when Hannah [Alexander] went on stage.” Another student named Abby Lafaele said, “[I liked] How most of the class was there sitting together and talking about it.” The ASL Honor Society worked with Partnership in Chattanooga to host Trix Bruce. Dr. Godfrey said that the show was great, and she was happy with the entire event. She hopes they will get to host more deaf performers.