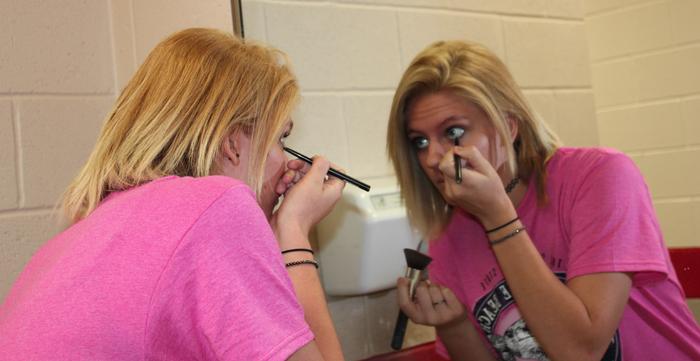 As a female, I understand that makeup plays an important role in our lives. As kids we don’t really care about our appearance, but as we grow older, we have to face the judgment of those around us. So, what do we do to look our best? We put on makeup, of course. Now, I don’t have a problem with makeup. If you want to wear concealers and foundations, or even just some eyeliner, that’s up to you. I get that you’d want to look good for yourself or maybe a special someone.

The real problem is when you’re wearing so many layers of makeup that your skin looks like a cheddar cheese Dorito, and your eyelashes are stuck together. Nobody needs to do that to herself. Wanting to cover a scar or a blemish is one thing, but making yourself unrecognizable is another. Being comfortable in your own skin is important, because whether you like it or not, not everyone is going to like you or think you’re pretty, especially not when your face is caked with makeup. It doesn’t require two hours to apply some stuff on your face.

I usually only wear eyeliner and mascara with the occasional eye shadow, and it only takes about ten minutes. I feel as if makeup should only seriously be used for special occasions such as weddings, parties, dances, etc. Sometimes I do feel like I should try harder, but, then again, I don’t want to look like every other girl in existence.

Now I’m not saying that you can’t wear makeup; that’s completely up to you. I’m just saying that unless you plan on signing up for Clown College, you might want to make sure we are still able to know who’s underneath all of that “artificial face.” Makeup isn’t war paint, guys. I’m in high school and I still see girls in the bathroom applying a second, third, or even a fourth layer of lip-gloss. Shouldn’t we know when enough is enough? Wanting to look pretty is understandable, but looking like you just got beat up by a box of crayons isn’t alright. Please have enough respect for yourself to learn how to properly apply makeup, especially if you’re only wearing it to impress people.