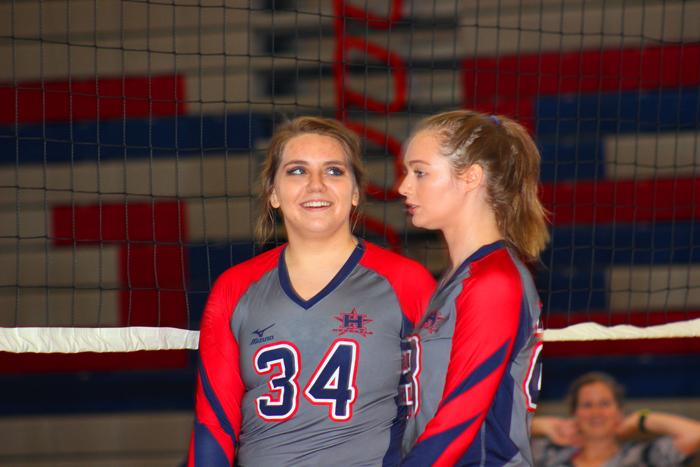 With every high school sport, you will always be faced with the same bittersweet event: senior night. This year’s volleyball team celebrated this night on Tuesday, and it was definitely an emotional event. Seniors Cayla Jacob, Sydney Eaker, Kinsey Hargis, Nikol Taylor, and Elena Guajardo were able to share their final home game together in a powerful and emotional way. Senior Elena Guajardo was especially emotional on senior night, as she was greeted at the game with a wonderful surprise. Sitting there in the stands waiting for her was none other than her boyfriend as well as Heritage High School alumnus Chase Guajardo, her sister. “What made senior night so special was seeing how much crowd support I had. So much of my family was there to see me along with all of my closest friends there to see me play.” she said. Elena has played on the team for all of her four years at Heritage High School. Seniors Sydney Eaker and Kinsey Hargis had similar sentiments, as both of the girls seem very enthusiastic about the gifts given to them by their teammates. The team played exceptionally well, with Nikol Taylor on 11 kills and Kinsey Hargis with 10 kills and 6 digs in their game against Lafayette. In addition to playing well, the team was ranked #7 in the state. They will be going to the region tournament this year. Our volleyball never ceases to amaze us, but they’ve made a decidedly sharp transition from “really good volleyball team” to “really great volleyball team,” and though we will be losing this fantastic group of seniors, their run isn’t over yet. We’re expecting wonderful things from them at the region tournament.