EDITORIAL: MARCHING BAND IS A SPORT 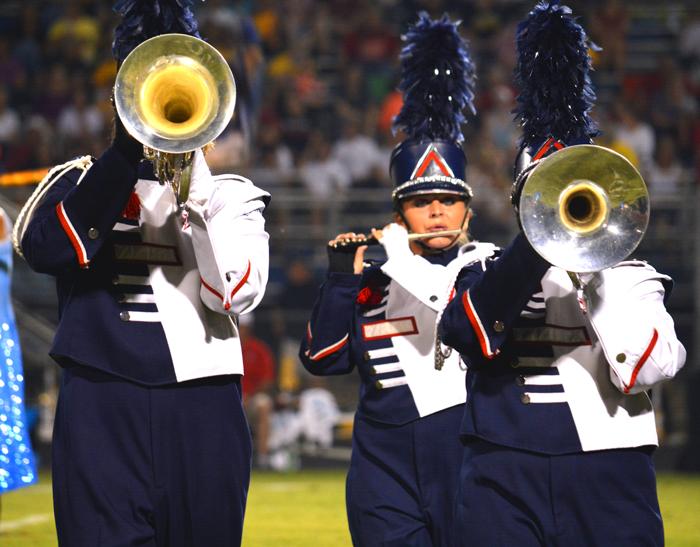 When I think of Friday night football, the halftime show comes to mind. The marching band is a huge part of Friday night football. The band does the half time show to entertain the audience while the teams are taking their break. I have been told by a couple of people that they think that marching band is nothing but walking around, toting a horn, and twirling a flag. First off the color guard does not twirl, we spin. We don’t have a baton, we have a six foot pole with silk attached to it. Band is more than just running around on the field sounding good; it takes time, effort, and a lot of dedication. During the summer, the band starts getting together to learn the show, and let me tell you that it is not a thing I enjoy doing. I do enjoy marching with the amazing Legion of Generals. I believe marching band is hard; you have to worry about hitting each other and bumping into each other. You can easily get a concussion from running into someone else. When I went to Grace Academy, I knew a band member that broke their elbow from running into another instrument. If you were to step the wrong way, BAM, your knee or ankle could be destroyed. When you’re in band, you put a lot of physical stress on your body just like any other sport.  During the summer, the band I march with works from about eight o’clock in the morning till about five-thirty in the afternoon. We get about an hour and a half for food and drinks. I love how active it keeps you. I know if I ever need to lose weight, all I have to do is go to band and I will sweat all the calories off. Band is physical and mental stress. We have to be able to memorize at least sixty sets for an eight minute show. Also, the color guard has to memorize the flag work and the band must memorize all of their music.

We have to learn the show within about a two week span.  During the first month of school, you work hard three days a week perfecting the show you have worked on since July. After the first month, the competitions start rolling in, and that is my favorite part of the year. When I go to a competition, it makes me the happiest person ever. When you perform then look up and the crowd is going crazy and screaming your name, it has to be the best feeling I have ever felt. Another feeling I can’t get enough of is when we win grand champion, best color guard, best percussion, or anything else the band wins. When the band that I perform with wins and all of my friends go crazy, it makes me so happy because our hard work has officially paid off. I will never forget at the end of the competition how we all surround the trophies and sang our alma mater.