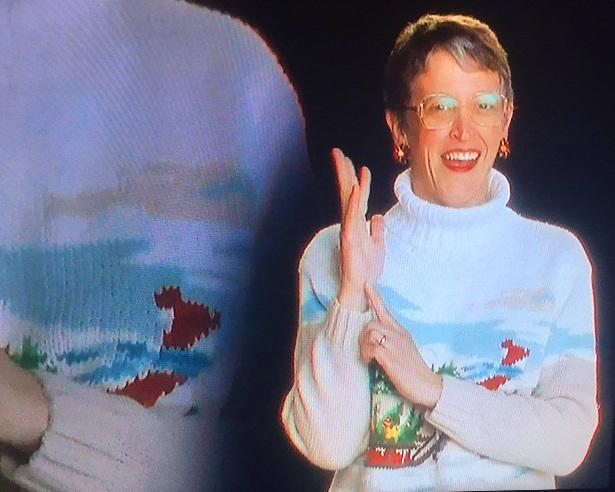 Jodi Upton, one of Heritage High School’s premier sign language interpreters, is (as of this past weekend) a “Saturday Night Live” star as well. For all of a few life-changing seconds, Jodi Upton is seen sporting a happy grin and a delightful holiday sweater as she signs through SNL’s “The Christmas Candle.” The question that I’m assuming is on everyone’s mind is how exactly this situation came to be. “I’ve interpreted a lot of local theater at places like the Tivoli, and one of my friends I used to interpret for moved to New York to do stand-up comedy. She does things with SNL occasionally, and one day she received an email that the show needed someone to do sign language. She gave them my name, they contacted me to send them a video, and I filmed it with the help of Coach Terry and sent it in. The director apparently liked it, because they told me to be in Brooklyn on Saturday at one o’clock. We filmed all day and I flew home that night.” says Upton. The skit she was featured in was a music video about a Christmas candle, and was played on this weekend’s episode of the popular comedy show helmed by Lorne Michaels. Mrs. Upton has been feeling the exhausting nature of fame, claiming that she was attacked early this morning by the Five Star News, and has been mentioned in numerous tweets from names that stretch from news anchor David Carroll to various HHS alumni. “I guess I am famous now.” says Jodi. Upton has done work for people like William Shatner, Peter Mayhew, and most notabley, various cast members of “The Walking Dead.” “My mom has made history,” said Jodi’s daughter, Georgia.

“The Christmas Candle” can be viewed at http://www.nbc.com/saturday-night-live/video/the-christmas-candle/3435359?snl=1