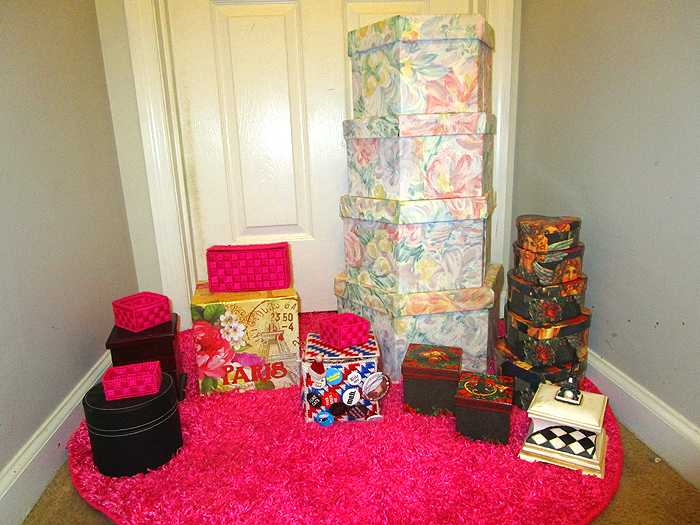 While most people know that I’m pretty weird, I only get weirder. For as long as I can remember, I’ve liked the weirdest of things. You know how some people will collect things like stamps, coins, cards, etc. because they have historical or sentimental value. Well, I collect things like socks, hats, and boxes. Before I go into any type of detail to as of why I collect boxes, let me just get one thing straight: No, they are not just cardboard boxes that you would use to pack things in. I have been asked if they were those kinds of boxes since I started writing this. They are handmade and crafty boxes that are meant to be keepsakes. I guess you could say that people have to think “outside the box” to understand what I’m saying. This “hobby” isn’t crazy, though. I don’t just run around stores specifically hunting a certain type of box. My collection consists of boxes that were given to me. My favorite set is four pink hand woven boxes that my great grandmother made me about two or three years ago around this time of year. I treasure them dearly because I hadn’t even met my great granny until that year and she didn’t get to be in our lives for much longer. One of my “cooler” sets is a large, pink flower patterned box that seems to be just one, but when you take the top off there is a smaller box that looks the exact same. It’s the exact same thing as a Russian nesting doll. As you open that box it’s just another smaller box of the same shape and color. In the end there are four boxes and they were made for me by a lady that had apparently heard about my fascination with them and just decided to make them for me. I have two Paris boxes also; one has words and decorations that represent Paris and the other has a small Eiffel Tower statue with the top that opens up. I have more that are basic rectangular and circular jewelry boxes so they’re not that special. Hopefully, there are other people that do this also because I feel pretty strange telling readers about this odd hobby.