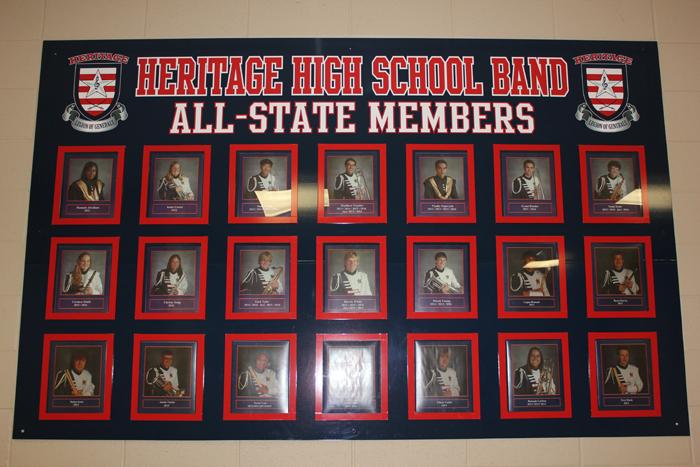 Eight to State by Makaela Patten

On January 14, over 2,000 students auditioned for the Georgia All-State Band. Eight members of our very own Heritage Generals band were selected to be in All-State. Those chosen were Mallory Girod, Ryan Harris, Ryan Hayes, Jonah Madaris, Noah Scott, Carmen Smith, Christy Song, Micah Young, and as alternates, Cassie Case and Audrey Smith. Our students first went to district (the first round of All-State), where if they scored high enough, they would go to the second round of All-State and compete against other talented student musicians like themselves from all over the state of Georgia. Students were given an etude to prepare, two sight reading pieces, eight or twelve major scales depending on your grade, and your chromatic scale. For trombone player Micah Young, it was “A lot of hard work … it’s not really something that comes naturally to everyone, me especially.” For him, the most exciting part about the whole experience was being in one area where there is a bunch of people who love music as much as you do. For Mallory Girod, a senior oboe player, “Band has been a pathway to … see what my talents are, and to realize that I don’t have to have a bunch of high test scores and be school smart to get somewhere … I just learned that music can get you places.” To practice for All-State, Mallory “did a lot of sight reading and a lot of lessons from different people. It was a pretty on-your-own thing; I really didn’t depend on anyone throughout this.” She continues to say that she is “really proud of herself for it,” and we are, too. Congratulations to all our Generals who made All-State!