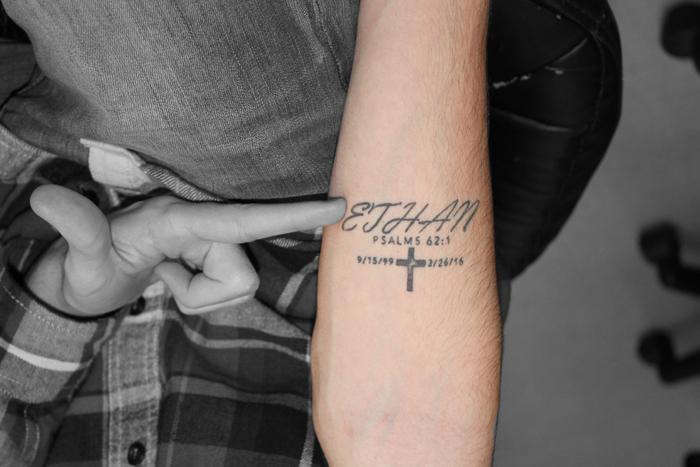 One of the biggest arguments in today’s society is whether or not tattoos are socially acceptable. I think back in the day when our parents were kids and teenagers, tattoos were viewed very differently. Then, the people who had tattoos were seen as degenerates and were judged as bad people for having them. Now, tattoos are slowly becoming socially acceptable and don’t automatically make someone a “bad person.” I am 16 years old, and I got a tattoo last year on August 18. I have had many people give me their mixed opinions on it–mostly well–but there have been people who disagree with my decision.

Ethan Gerrells, an HHS student who passed away last March, was one of my best friends. Since his death, my life has changed drastically, and I miss him every single day, more every day. Over the summer, while I was at a church event down in Destin, Florida, I thought up the idea of my tattoo. It popped into the back of my head and didn’t go away all night, so when I got back to my hotel, I hopped onto Photoshop and designed my tattoo. Since that day, I had my heart set on getting the tattoo. I got home after a week of the church event and immediately ran the idea by my mom. Honestly, I expected her to be against it, as she grew up in a very conservative Christian home with parents who are very against tattoos. When I told her exactly what it was going to be, she was very understanding and wasn’t against at all; all she wanted me to do was pray about it for awhile and run it by a few other people. Well, after about three months are thinking, praying, researching tattoo parlors, and running the idea past other people I trusted, I made the decision to go and get it on my right forearm.

My tattoo (the article picture) has a lot of meaning to me, and I know I will never regret getting it. Since I’ve gotten it, as I said earlier, I have gotten mixed opinions on my tattoo. Most of them are people telling me how much they love it, but on occasions I’ll get the annoying “you do know its permanent, right?” Rarely do I ever get someone who doesn’t like my tattoo, but I have gotten the passive-aggressive, “What if you want to get a job in the future,” question. That question can get annoying, but I have my tattoo in a spot where if my employer needs me to cover it up, I can. I think that a lot of people’s concerns with tattoos revolve around the whole job aspect of it, but I believe the further we get as a society, the more tattoos will be accepted in job atmospheres.

I believe that a tattoo should have meaning; if a tattoo doesn’t have meaning, I believe you shouldn’t have one. My tattoo has a lot of meaning to me, and that’s why it annoys me when people make passive-aggressive comments about it. Now, never should you ever look at someone with a lot of tattoos, assume they don’t have meaning, and immediately judge them. Talk to the person.  Get a convo going and ask them; for all you know, every single one of them could have a deep meaning. Moral of the story, which you have probably heard plenty of times–never judge a book by its cover.

In the end, we all have our opinions on this topic; it may be you fully support tattoos, you are in the middle about them, or you absolutely hate them. I believe that if you want a tattoo and it has meaning to you, you should think about it for a while and really come to terms with the decision. After that period of thinking and deliberating with people you trust, go with whatever decision you make.