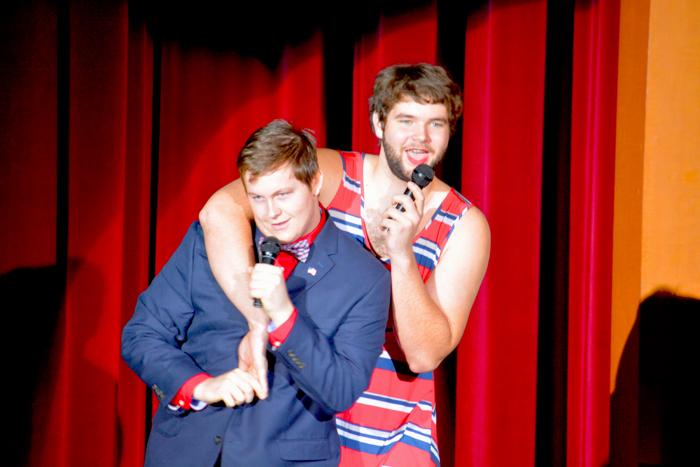 On February 9 the Taj hosted its annual talent show, and boy oh boy, was it magnificent. Heritage has so much talent walking down its halls everyday and it is so fun to see all the undercover stars come out on stage. The show featured seasoned performers such as the lovely and extremely talented Maya Jaffar, the angelic voice of Lizz Adams, and the legendary Kyle Hullander, and to no one’s surprise, they did not disappoint. They wowed the crowd once again with their amazing voices. There were also some new faces shining in the spotlight like Connor Harlan who blessed the school with his take on Prince’s song “Kiss,” featuring Kimi Carter as the tambourine girl. It was pretty cool, and one might even say that it ruled their world.

Caleb Atkins, the announcer, kept the very few muffled laughs going with his puns and corny jokes. He even competed in the lip sync competition with Noah Sims and they performed Queen’s “Fat Bottomed Girls,” and the only thing better than their performance was Caleb’s super sparkly sequin attire. Don’t get me wrong, their act was good, but it was no match for Seth Carter and Jake Frogge’s performance of the beloved High School Musical song “Everyday.” With Seth’s beautiful red and blue dress and his face painted for the Gods and the heartfelt promposal at the end, it was a tough act to beat.

A lot of students were surprised to see that Heritage is not only filled with talented students, but talented teachers as well. One of the counselors, Mr. Franks, surprised everyone with his beautiful voice as he sang a song called “What Faith Can Do” and really moved the crowd. There was also a teacher band consisting of Mr. Wynne, Dr. Scott, Mrs. Chappelear, Mrs. Taylor, Mr. Broom, and senior Gabe Albee, and it was killer. Their old time rock and roll sound knocked everyone’s socks off.

The show featured some super sick dance routines and other beautiful voices as well. As per usual, the dance team amazed everyone with their gorgeous outfits and graceful spins and leaps. There were two hip hop routines this year that really spiced things up with the groups dancing to popular songs such as “Bad and Boujee” by Migos and Fat Joe’s “All the Way Up.” Ashley Crump also performed a wonderful solo dance routine. Rising star Kimi Carter performed an original song from her new EP, called “Run.” I wouldn’t be surprised if we hear that song on the radio one day. Hailey Bilbra, Erin Lord, Anna Driskell, Megan Courtney, and Grace Driskell also impressed the audience with their fabulous vocals. Heritage holds so much talent and there is no doubt in my mind that a lot these performers are going somewhere.