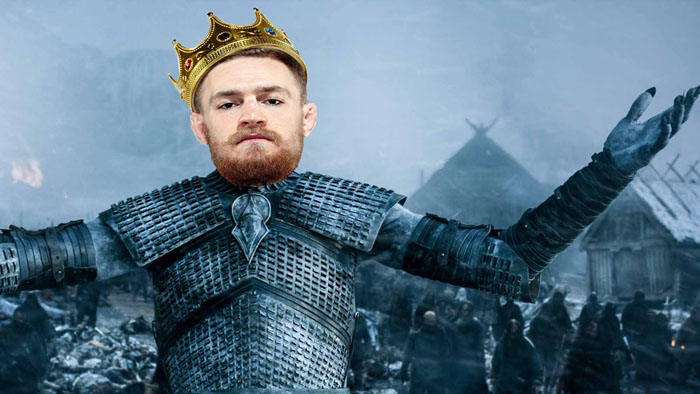 UFC Lightweight Champion Conor McGregor might be making a cameo appearance on one of the remaining two seasons of the HBO show “Game Of Thrones.” Conor McGregor is one of the most popular mixed martial artists on the planet. Now that he has gone where no other UFC fighter has been before, he seems to be game for anything. Showrunners David Benioff and Dan Weiss are well known to be UFC fans. They even announced that season seven would be shorter than usual during a visit to the UFC Unfiltered podcast. McGregor’s Irish heritage might help him blend in with the mostly European cast of “Game Of Thrones.” McGregor would be cast as a villainous crew member on Euron Greyjoy’s ship “The Silence.” Euron cut the tongue of every person on the ship, so the famously verbose McGregor would have to adapt somehow. This isn’t the first time McGregor has been linked to “Game of Thrones,” either. Back in October of 2015, McGregor was sparring with “Game Of Thrones” character The Mountain in a video that has since generated many views on YouTube. When asked about it, McGregor said “not even a Mountain can take shots from me.” Fans of both “Game Of Thrones” and UFC would especially enjoy such a thing. The cameo would be a nice clash of two popular parts of entertainment if both McGregor and HBO can reach an agreement. The appearance might even lead to future castings in other shows.