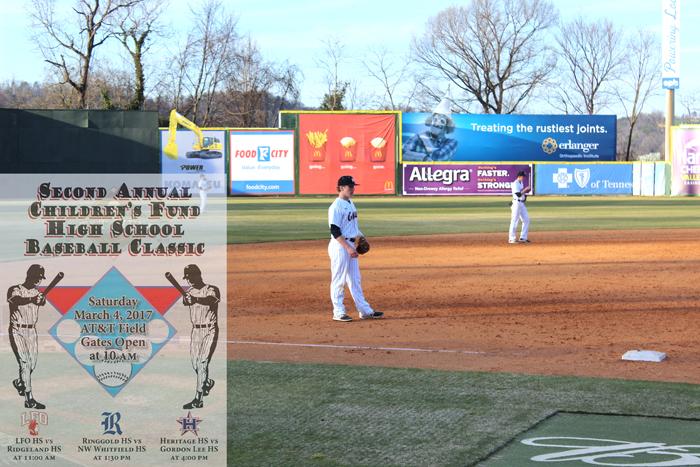 On March 4 at AT&T Field in Chattanooga was the second annual Baseball Classic where six high school baseball teams competed. The teams played to raise money for the Catoosa County Children’s Fund. This fund’s goal is to provide qualified Catoosa County School children and families with short-term needs such as food, clothing, shelter, dental and medical care, educational related supplies or fees, or short-term emergency needs in an effort to develop their physical, mental, and emotional health and welfare.  It was an awesome event, and I was able to go watch our Generals play. You could tell most players really had fun with the experience. After all, it is not every day that you get to play on the Lookouts’ field.  Heritage vs. Gordon Lee was the last game of the day, with the first pitch at 4:00 p.m. The two earlier games were Ridgeland vs. LFO and Northwest Whitfield vs. Ringgold. Both of these games were good and entertaining; however, both HHS and Gordon Lee have former players who have gone on to play college baseball or professional baseball in some cases. The game was a defensive battle, if I have ever seen one. Tripp Church threw a great game, only giving up one run. The Generals’ offense was led by Cole Wilcox and Josh Gibson, each picking up an RBI. Josh Gibson actually had a walk-off double in the bottom of the seventh with two outs. As soon as he hit the ball deep into right center field, it was clear we had won.  The stadium was electric. It was an awesome ending to a rather boring game, but overall it was not about the game. The goal was to raise money and awareness for a great cause; they did just that, and I am so proud to go to a school where we make charity a priority. Overall I am confident the Catoosa Children’s Fund is grateful, and this is quickly developing into an awesome tradition that baseball players can look forward to every year.