YOU THE REAL MVP 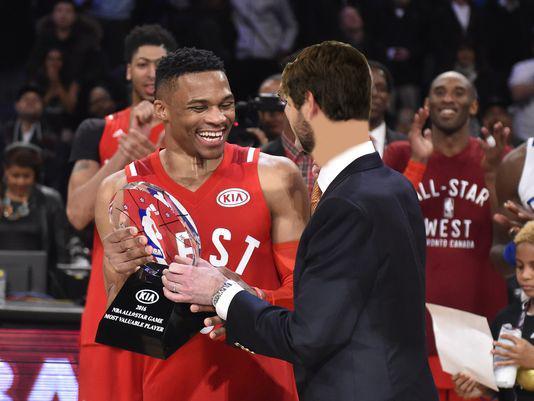 This year in the NBA, the running for the league MVP is very close. Now, if you were to ask five people that watch basketball who they thought should, win you would likely get five different players; however most NBA analysts shortlists center on these five players: Lebron James, James Hardin, Kawhi Leonard, and Russell Westbrook.  All of these players are outstanding and play great, but if I had to choose my Most Valuable Player today, it would be Russell Westbrook. He is on pace to average a triple-double this season. A triple-double is when three stats are double digits. If you have one triple-double in a season it is an awesome feat, but to average a triple-double over an eighty-two game season is unheard of. Also if you consider the fact that his former teammate and friend for a long time, Kevin Durant, left in the summer to Golden State leaving Russell to fend for himself make his accomplishments this year even more impressive. Now, I am not alone in thinking that Russell should win the MVP, but there are a few people who believe he should not win. Most notably Dallas Mavericks owner Mark Cuban saying he should not be even in the conversation, and he only has three MVP candidates: Lebron James, Kawhi Leonard, and James Hardin. Others haters are saying that yes Russell is almost averaging a triple-double, but his team may not make the playoffs. However, even with his team being pitiful, that cannot discredit the season he is having. Right now, no team wants to play the Thunder because of how dominant Russell Westbrook has been this year, and if you are going to average a triple-double you deserve the MVP.