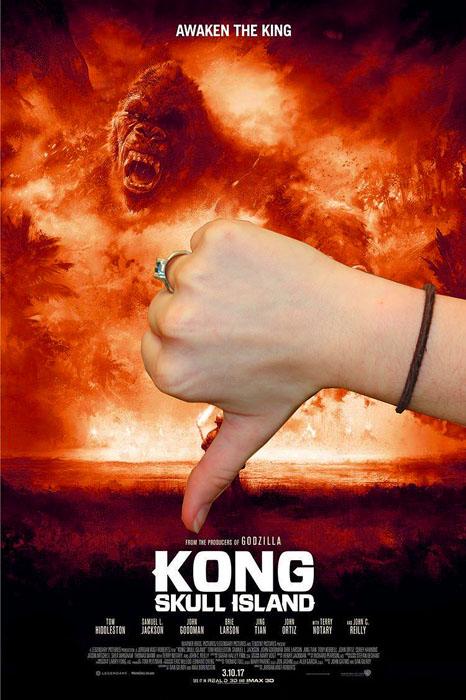 Hollywood’s love affair for monster movies is returning. In 2014, the first installment in the so-called “Monsterverse” was shown in theaters. While “Godzilla” got mostly positive reviews, it also got a lot of complaints. One of the most frequently recurring complaints is that Godzilla himself was barely in the movie. Some saying he only got about eight minutes of screen time while some say that it’s closer to eleven minutes. Fast forward three years and we’re finally getting the second installment in the monsterverse: “Kong: Skull Island.”

“Kong: Skull Island” is about two scientists, played by John Goodman and Corey Hawkins, who lead an expedition on this uncharted island and along with them is a photographer, survivalist (like Bear Grylls), and a ton of armed soldiers. They soon realize they are in over their heads when a giant ape knocks all of the planes out of the sky, killing dozens of men and leaving very few alive. The group divides into two. The soldiers go off to kill the ape while everyone else makes their way to a rendezvous point so that they can get picked up in three days. Through this journey, the groups encounter bizarre and deadly creatures, meet natives to the island, and rescue a man that had been stuck on the island since the early 1940’s (played by John C. Reilly).

I was hyped for this movie since I saw the Comic-Con Trailer. I even said it was my third most anticipated movie of 2017. I was rather let down. This movie is very entertaining don’t get me wrong, but it’s just that: entertaining.

The characters had no depth. I didn’t care about a single person in the movie. They could’ve killed off all the leads and I wouldn’t have cared less. I didn’t even bother remembering people’s names or their backstories. Another issue is that there are so many characters that everyone seems to be in their own separate movie. Brie Larson is in a war drama, Tom Hiddleston is in an adventure movie, Samuel L. Jackson is in a revenge thriller, John C. Reilly is in a comedy, and Corey Hawkins is in a science-fiction film. Sadly, the only interesting one out of those is Samuel L. Jackson’s. The CGI is astoundingly weird. It’s not bad but when you put it side by side to Peter Jackson’s 2005 “King Kong” it fails in comparison. The skull-crawlers were done very well though. Speaking of “King Kong,” this movie tries too hard to be just like it but at the same time be wholly original and it doesn’t work.  There’s literally a scene where Kong breaks a dinosaur’s jaw while holding the woman in one hand. Sound familiar? It should since there is a scene exactly like it in “King Kong.”

Tom Hiddleston basically phones in his performance for about 95% of the movie. I feel that it has to do with the rather wooden dialogue (more on that later). Another complaint with Tom Hiddleston is that is character is great at just about everything. He’s like Rey in “Star Wars: The Force Awakens;” he can do anything right on the dot. I will say though he does have a rather epic action sequence, He puts on a gas mask and heads to this green smoke with a sword and he just mows down these flying creatures. It reminded me of the scene in “Rogue One: A Star Wars Story” where Darth Vader just takes out all of these rebel soldiers in about 30 seconds.

Brie Larson is just there to look pretty. She does absolutely nothing for the plot. She’s just there to take photos of the expedition and when things go awry she still continues taking pictures. She’s like the damsel in distress archetype but she doesn’t need to be saved she just can’t do anything for herself.

Samuel L. Jackson is definitely the best actor and has the best character in the whole film. He plays an aging air force general named Preston Packard, that sets off on a quest for revenge to kill Kong, the ape that killed a ton of Packard’s men. Packard has an Ahab-like obsession with killing Kong. He goes as far as using all the supplies they have to take down the beast and blow him to pieces. Jackson’s role was made for him. Nobody else could’ve pulled off Packard as well as Jackson did. John C. Reilly did not need to be in this movie. He wasn’t bad it’s just that he wasn’t necessary to the plot. All he did was provide unnecessary exposition and delivered comedy (while hilarious) that jeopardized the tone of the movie several times.

Even though there are some glaring issues with the movie it still is entertaining. I had fun watching all of the scenes with the monsters and Samuel L. Jackson’s revenge narrative. That being said I felt it dragged at several points. This “Kong” movie is only two hours while Peter Jackson’s “King Kong” is over three hours. I thought Peter Jackson’s movie went by faster. This movie really reminded me of a B-rate monster movie. “Kong: Skull Island” is to monster movies as Quentin Tarantino’s “Deathproof” is to action movies. They have a big budget but in the end make more of a tribute to their respective B-rate genre. If you enjoy B-rate monsters then this will be right up your alley. As for me, I would recommend (even though it was entertaining) you skip “Kong: Skull Island” and watch Peter Jackson’s remake of “King Kong” instead. Note: there is post-credits scene but it’s not worth sitting through eight minutes of credits to wait and see. Corey Hawkins character just reveals very grainy pictures of Godzilla and all of the other monsters that will appear in the monsterverse.