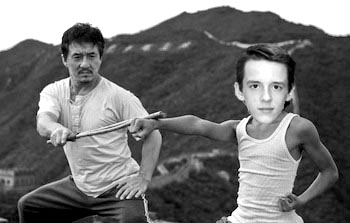 Hollywood has had a huge obsession lately with rebooting and remaking movies. Some movies deserve it, and some don’t. I think that with a few, the makers can write an entirely new story that’s even better than the original. Take the new “Planet of the Apes” movies for example; they made a prequel that really brought the franchise back. It had an original storyline and it’s one of my favorite movies. Some movies were never asked for. Nobody wanted a half animated, half live action “Smurfs” movie with Neil Patrick Harris. I like the Smurfs and Neil Patrick Harris is an amazing actor, but that movie was terrible. I didn’t even enjoy it when I was nine years old and it came out. “Karate Kid” is a great example of how reboots can be horrible. The 2010 “Karate Kid” is a movie that had a great original but was ruined by the reboot. I don’t think it even needed to be done again. There really wasn’t anything wrong with the first one. Not enough time has passed. I can see if it relied heavily on special effects and the first one was an eye sore, but there was no need for it at all, and nobody wanted it. I love the first one, but I didn’t enjoy the remake at all. Batman is a franchise that has had so many versions in its long history. The “Dark Knight” movies were perfect for so many reasons. It made up for all of the bad movies and shows in the past, and it should have been the last for a long time. It would have been a perfect last movie. Instead, “Batman v. Superman” ruined Batman for me. I have never despised a movie so much as “Batman v. Superman.” Aside from “Suicide Squad” maybe. “Fantastic 4” didn’t go very well either. The 2005 one wasn’t very good either, but it was still WAY better than the 2015 version. Reboots, remakes, and other such things are either sad, disgracing, attempts at recycling a good idea, or they can be a way to revive love in a movie.