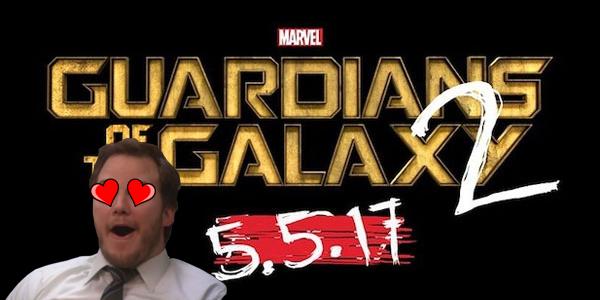 “On May 5th the greatest movie in the history of movies is coming. There has never been and will never again be a movie like this. Seriously. Ever heard of Citizen Kane? We’re much better. Seriously. Our movie just tested at over one million points. Rotten tomatoes already has it at 234% fresh. [The movie] will win every movie award AND about 39 Olympic gold medals in swimming, gymnastics, the skiing event with the gun, x games, snowmobiling and everything. It will win the World Cup and about 7 super bowl rings, sorry Tom Brady. This movie will fry your brains and lift your spirits. James Gunn will be elected president of the world. They will add the faces of the guardians to Mount Rushmore for sure. We’re gonna get a planet. May 5th will become a national holiday. Everyone will get pregnant. Candy will fall from the sky. Global warming will stop. Dinosaurs will come back to life. Which unlike some movies might tell you, is actually a really good thing. Because they won’t flip out and kill people instead they’ll be your awesome pets. So basically get your tickets as soon as you can. Don’t be the only person on the planet who doesn’t see this movie.”

You might be asking yourself “What is this movie? The movie to end all movies?” Well, this direct quote comes straight from the one and only Chris Pratt, who stars in the new movie “Guardians of the Galaxy vol. 2” as Starlord. His goal was to hype everyone to see the new movie, a sequel to the movie “Guardians of the Galaxy,” which came out on August 1, 2014. Pratt released a video on Facebook on Wednesday, March 15, telling the world all of this, trying to hype his new movie and the video soon went viral. Now everyone wants to go to see the new Marvel movie on May 5, to see if it’s as amazing and ground-breaking as Chris Pratt’s hype video makes it out be.

The teaser trailer, which came out during the Super Bowl on February 5 and before Pratt’s video, shows all the same characters as the first movie, such as Starlord (Chris Pratt), Groot (Vin Diesel), Gamora (Zoe Saldana), Rocket Raccoon (Bradley Cooper), and Drax the Destroyer (Dave Bautista). After the first movie, everyone knew by the way it ended that there would be a second, and everyone has been waiting patiently for the news. When the trailer came out, many people went crazy for it because it showed humor, action, sci-fi, and much more, just like the first movie that everyone fell in love with. There have been people that have already said that they do not want to see the new movie, based on Marvel’s history with sequels not living up the expectations that fans from the first movie have. However, after the hype video that Pratt made, expectations shot through the roof. Will “Guardians of the Galaxy vol. 2” live up to Pratt’s insane expectations? I can’t wait to find out!