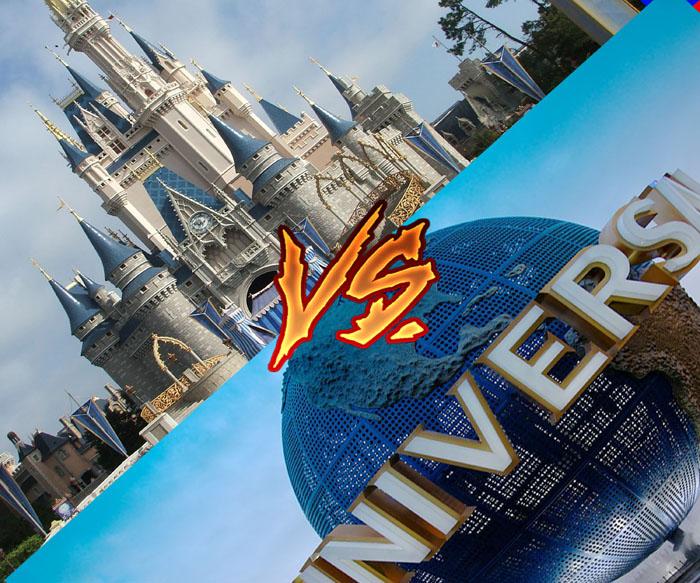 Theme parks are big. Millions of people visit them every year and the parks make billions with a B. I love theme parks. When I lived in Florida we would go to Walt Disney World at least once a month since we had Florida resident passes. I still remember some (vague) things about my trips when I was just four. Such as seeing for the first time Darth Maul twirling his lightsaber when it was a “Star Wars Weekend” and being prepared for the (at the time huge) drop on “Pirates of the Caribbean.”  Since then we had moved and aren’t as able to go down to Disney World nearly as much as we want to; we are able to still go a lot though. When I was 14, my mom and I finally got around to going to Universal Studios Orlando. That is something I’ll never forget. I was finally able to be a part of some of my favorite movies and my heart pounded when I first walked into Diagon Alley since I loved the “Harry Potter” series as a kid. This raised an interesting question in my head: which collection of parks is the best…Walt Disney World or Universal Studios Orlando? Some will defend Walt Disney World with a passion and some will argue that Universal is better. I feel that they’re both great and they can learn from one another.

Rides: that’s why parks are even as big as they are. If a place has horrendous rides then the place won’t last too long. Disney has an abundance of rides while Universal has a way smaller amount of them.  Universal excels at one very particular kind of ride: simulators. In Disney, the simulator vehicle stays in one place and only shakes and jerks the riders. This is definitely the case for “Star Tours” in Walt Disney World’s “Hollywood Studios.” As oppose to the simulators such as “The Amazing Adventures of Spider-Man” and “Transformers: the Ride 3-D” in Universal. In “Transformers: The Ride 3-D,” your motorized vehicle actually moves on a track at a rather fast rate which gets heightened by the visuals and the action going on. In “The Amazing Adventures of Spider-Man,” The vehicle takes the riders through several different rooms such as the Sinister Six’s lair, the sewers of New York, and an evidence room.  Yet, Disney does have some tamer rides that are great. “The Haunted Mansion,” “The Pirates of the Caribbean,” “Spaceship Earth,” and “The Three Caballeros” are just a few examples while Universal severely lacks in slow moving dark rides. Those rides are pretty much limited to “E.T. Adventure” and “The Cat in The Hat” is pretty much all Universal’s got and their storytelling is lacking.  Say whatever you want about “The Haunted Mansion” or “The Pirates of the Caribbean” but it’s hard to disagree with the fact that their storytelling is superb. As oppose to “E.T. Adventure” which relies too much on nostalgia and not nearly as much as telling a good story.  When it comes to the arcade shooting rides I’d have to give the victory to “Men in Black: Alien Attack.” While “Buzz Lightyear’s Space Ranger Spin” is visually appealing and fun, it has a few drawbacks including guns that aren’t as mobile as oppose to those in “Men In Black: Alien Attack,”  you have to hit specific targets oppose to anywhere on the alien, and the story isn’t as grounded as the aforementioned Universal ride.  For me, Universal has rights to movies I’m a fan of including “The Fast and The Furious,” “Men in Black,” and “Jurassic Park” so I’m genuinely excited to get on a ride there and experience the movies in a way more immersive experience.

When it comes to shows Disney wins by a landslide. Universal doesn’t have that many shows and the only one I can say I honestly like is “The Horror Make-up show.” The show is a 20-minute show that presents to you how some effects are made in movies such as getting cut my a machete and how some old-school animatronics were controlled. The rather mature humor, interesting premise, and a brief moment of terror at the end make this a very delectable show and one of the strongest entries I have seen in the theme park show scene. Unfortunately, Disney hammers Universal by featuring an absurd amount of shows. “Philharmargic” in the Magic Kingdom is great. The audience learns that Mickey Mouse is about to conduct an orchestra only to have things go awry when Donald Duck puts on Mickey’s famous sorcerer hat that was seen in the original “Fantasia.” The audience then gets a visual and musical treat by watching revamped scenes of their favorite Disney songs including “Be Our Guest,” “Part of Your World,” and “A Whole New World.” Then if you go to Hollywood Studios there is the “Indiana Jones: Stunt Spectacular.” This showcases how the action and stunts of “Raiders of The Lost Ark” were done. It’s a very thrilling show because while the stuntmen are professionals the possibility of injury is a clear and present danger.  In addition to this, Hollywood Studios boasts four other Star Wars shows. Two of which we see live actors twirling lightsabers, shooting off guns, and igniting flames on the stage and more! EPCOT also has an exuberant amount of short films in their world showcase. My favorite is definitely the one in France. It gives you a visual treat by showing off all of the locations and cultures in France.

Dining is a unique battleground for the two collections of parks. The fast-food is pretty much the same no matter where you go. While Disney has way more sit-down restaurants, there isn’t one that really sticks out to me. At Universal’s Citywalk (a collection of stores and restaurants outside of the parks) there are two of my favorite restaurants: Hard Rock Café and Margaritaville. I love Margaritaville. For those that don’t know, Margaritaville was inspired by one of my favorite artists of all time, Jimmy Buffett. The whole atmosphere screams Jimmy Buffett. From the boats adorning the restaurant, the names of meals (for example the Cheeseburger in Paradise), and other assorted decorations including a gigantic blender with lyrics from the song “Margaritaville.” The Cheeseburger in Paradise is really good.  It hit the perfect amount of savory that I like in a burger.  The volcano nachos are the definition of overkill. There’s so much piled on that the plate feels more like a dumbbell than a meal holder.  The Hard Rock Café is also phenomenal. The atmosphere is one of a kind (even though there are several Hard Rock’s in the world) and the food is really good.  But, if you ask to name a really good restaurant at Disney, I would have to pause and think about what all Disney has to offer. In the end, the winner would have to be Wolfgang Puck’s which is pretty good but it’s not my favorite place to eat. Another restaurant that is actually very good is a Mexican restaurant in Epcot and that’s about it.

I’m just going to say it…the ways to get to a park at Universal is a god-send. At Disney you pretty much have to wait anywhere from 20-30(or longer) minutes to wait on a bus. Even then you might not be guaranteed a seat. It is extremely frustrating and makes your feet hurt before you even step into the park and at night, when you’d rather saw your foot off then deal with the pain, the waiting of a bus would drive anyone to the brink of insanity. To get to the parks at Universal is way easier; you can either take a five minute walk or take a water taxi which only takes about 10 minutes.  Plus, when you leave the park you can take a rickshaw to your hotel if you’re on-site.

Speaking of hotels Universal probably takes the trophy. The hotels there are very luxurious. I feel that you get more for your money there. As oppose to Walt Disney World where you pretty much get what you pay for. When it customer service Disney gives Universal Studios a beat down. Whenever I go to Walt Disney World everyone is smiling and exceptionally kind. Everyone seems happy to be there. While Universal has good customer service it doesn’t live up to that Walt Disney World. A lot of people there tend to be kind but just not excited about what they do (for the most part).

While these are my two favorite places to go on vacation I can honestly say that I can’t say that one is better than the other overall.