CURSED BUT NOT OUT 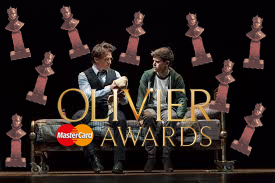 Everyone remembers when the book “Harry Potter and the Cursed Child” came out in 2016. I, for one, remember it very clearly and I remember it taking the world by storm. Everybody was so heartbroken when the “Harry Potter” series finally came to an end; so when J.K. Rowling released this sequel, it was very popular. This screenplay is from the play that was written by J.K. Rowling, John Tiffany, and Jack Thorne, and is currently on West End, which is the Britain equivalent to our Broadway. Recently, Britain aired the Olivier Awards, which is their equivalent to our Tony Awards, on Sunday night and this magnificent play took home nine prizes, shattering the record of most awards taken in one show set by “Matilda the Musical” and “The Curious Incident of the Dog in the Night-Time.”

“These awards included best new play, Jamie Parker took best actor for his portrayal of Harry, while Noma Dumezweni won supporting actress honors as Hermione and Anthony Boyle supporting actor honors as Scorpius.” says The New York Times. “Harry Potter also won for best director (the Tony winner John Tiffany) and for its lighting, sound, costumes and set design. The production had tied the record for the most nominations for any show in Oliviers history, with 11.”

Due to the incredible success that this play has become, J.K. Rowling has decided to bring her sold out show across the Atlantic to be on Broadway by the spring of 2018!