BATTLE FOR THE TOP AND BOTTOM 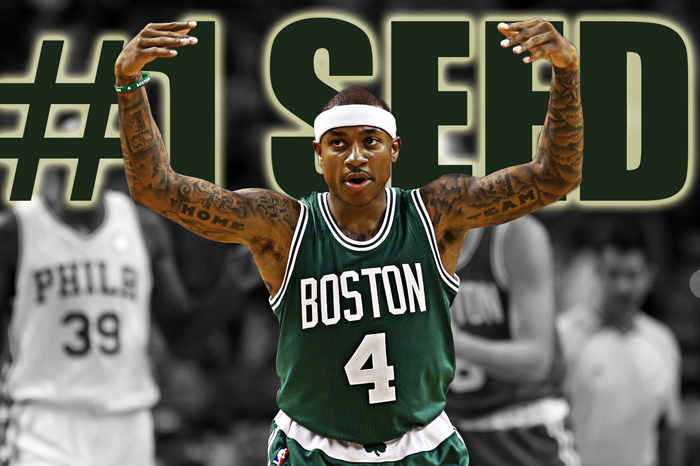 On Tuesday, I wrote an editorial about who I believe should win the NBA MVP between Russell Westbrook and James Harden because the NBA regular season was coming to a rapid end. When I say rapid, I mean the regular season officially ended yesterday and it was a very climatic ending. Heading into the last games of the year, a lot rested on these games. Usually this game really doesn’t mean much to teams, but that wasn’t the case yesterday. In the Eastern Conference the difference between the first and second seed was one game and there was a two way tie for the eighth seed. The Celtics needed to win yesterday to secure the one seed but the Cavs needed the Celtics to lose and the Cavs had to win to get the one seed. Then, the Heat and Bulls were tied for the very last spot in the playoffs in the East. Heat needed a win and a Bulls loss but the Bulls just had to win to secure the spot.

Let’s start the day with the race for the number one seed in the East. The Cavs have run the Eastern Conference ever since they signed LeBron James back. They have made the finals two straight years and hadn’t been anything other than the one seed since November of 2014. That changed last year as the Cavs and Celtics have been battling for the one seed for the last month and half. It came down to the last game of the year as the Celtics had a one game lead just needed a win over the Bucks to secure the spot; they did just that. The Celtics are the number one seed heading into the playoffs and the Cavs are the two seed for the first time in almost three years. Now, who the Celtics would be playing was also determined by the last game of the year. The Bulls and Heat have been going back and forth for the eight seed and it was finally decided yesterday. The Heat started the season at an abysmal 11-30, but they completely turned it around in the second half of the season, literally. The Heat went 30-11 in the second half of the season and finished 41-41. Sadly, that just wasn’t enough to make the playoffs. The Bulls defeated Nets and officially eliminated the Heat out of the playoffs.

The first games of the NBA playoffs are this Saturday, April 15. The NBA playoffs are always intense and a very good watch for basketball fans and sports fans in general. All I can hope for is that we don’t see another Warriors v Cavs rematch in The Finals, but that may be a pipe dream.