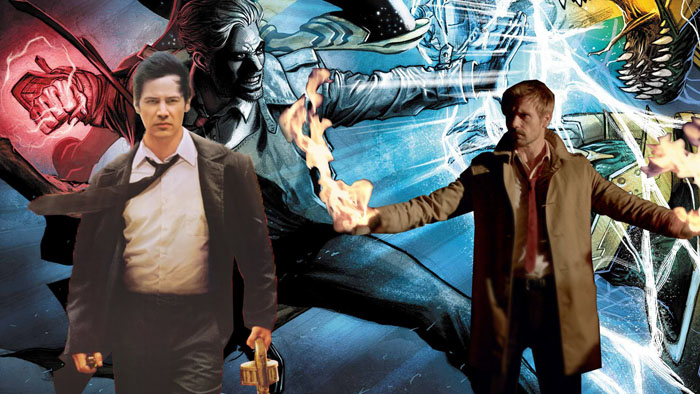 There are tons of characters that belong to DC Comics; Batman, Cyborg, Killer Frost, Superman, and Deadshot are just a few examples. Yet, none come close in comparison to John Constantine AKA my favorite comic book hero (of either DC or Marvel).  While some prefer more cut and clean heroes like Superman or Captain America, I prefer the British antihero. John Constantine is a man that is caught between a supernatural war. He performs exorcisms, chants spells, knows all about the occult, and tends to shrug off any assistance from angels that often try to help him. There have been several different takes on why he does this but they all have the same goal: earning his salvation to get into Heaven.  Either way, it’s pretty awesome to see him fight demons.  While the New 52 version of Constantine receives some hate I personally like it. Yes, it is a little subdued when compared to his “Hellblazer” series but I still like what they did with Constantine.  The story and artwork of the New 52 Constantine is constantly compelling and appealing.  I personally like the 2005 film with Keanu Reeves. While Constantine is missing his normal outfit and isn’t British, it still felt like a “Constantine” storyline. The plot of the movie is that demons are crossing into our world and Constantine has to kill them all off before they unleash a nightmare upon Earth. He is guided by the Archangel Gabriel and is assisted by Chas (his friend) and a woman whose sister committed suicide and she wants to know what caused her to do it. Of course I have to bring up the ill-fated TV-show. It only lasted one season and I absolutely loved it. Matt Ryan was born to play Constantine. He was the sarcastic, snarky, egotistical, and British Constantine the fans have come to love and adore. Plus, his outfit was extremely accurate to the comics. Trench coat, red tie, and white shirt were what he basically wore the whole show unlike Keanu Reeves in “Constantine” where he wore a generic black and white suit.

Constantine’s weapon arsenal is way better than Batman’s or Iron Man’s. Because name one other superhero that can kill a demon using a fire vortex or can set his hands on fire using lighter fluid and not get burned.  To top it all off he has a gun called the “holy shotgun”.  It’s a shotgun that is designed to kill demons. How awesome is that?!

I also like the fact that Constantine is a very tortured soul. He feels overwhelmed by all of his friends that have been killed because of him, exorcisms that went wrong and ended up sending innocent souls to the underworld, and the grief of knowing that he can’t get into Heaven for what he’s done.

While Batman and the Avengers are heavy weights in the comic book realm, I would highly recommend checking out the character of John Constantine to just about everyone.