EDITORIAL: THAT MUSICAL IS SO 2014 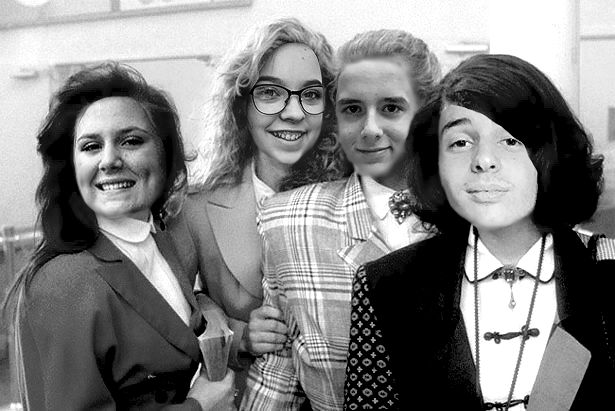 What do you think of when you hear “September 1, 1989?” For me, I think of the musical “Heathers.” While most people (including myself) enjoy songs from “Hamilton,” “Rent,” and “Dear Evan Hansen,” I’d rather listen to songs about 7-Eleven and having a party while the parents are away. The musical follows Veronica, a nerdy senior girl who just wants to go to college. She walks in on the Heathers, who are the most popular girls in school, getting into trouble, so she quickly forges a note for them, hoping that if they pretended like they liked her, the other students would leave her alone and quit picking on her. They start off laughing at her until she tells them that she can do other notes like report cards. They give her a makeover and popularity. They even have her forge a note to her best friend, Martha, even though she really didn’t want to. At a party, Veronica hurls on Heather Chandler’s (the most popular Heather) shoes. She threatens to ruin Veronica’s new found popularity. She becomes a “Dead Girl Walking.” She decides that the best way to spend her last day of being popular would be to sneak into new kid J.D.’s house and spend it with him.  The next morning, the two lovers went to Chandler’s house and tried to help her with a hangover to get back on her good side. J.D. casually suggests that they put drain cleaner in her drink, even pouring a mug full of it. Veronica accidentally grabs the mug of drain cleaner and takes it to Heather, who chugs it and dies. Veronica has to think quickly on what to do, so she begins to write a suicide note from Heather. After a while, a rumor begins to circle about Veronica, and she and J.D. begin to plan what she thinks is a prank, but it’s really a murder. Veronica realizes that J.D. is not who he says is and breaks up with him. He becomes enraged and blames it on all of the students for “brainwashing” her. He builds a bomb and sneaks into Veronica’s house, telling her his whole plan to blow up the school, killing everyone inside, to bring the two of them close again. He even reads the note he wrote to explain why they all died. She fakes her suicide which causes him to get upset and go through the plan without her. When he leaves, she runs off to the school to save everybody. He grabs the bomb when she decides to sacrifice herself and runs off only with the faint sound of the explosion in the background.

This musical has so much to offer to everyone, from catchy show tunes, like “Beautiful” and “Freeze Your Brain,” to a dramatic plot that features murder and dry humor. You may have seen the movie which is also fantastic, but the musical added some more details that the movie didn’t have, like the movie starts off with Veronica already being popular. My favorite song from the musical has to be “Meant to be yours,” which is the song that J.D. sings to Veronica about his plans to go to the pep rally and killing everybody. Another one of my favorite songs is “Freeze Your Brain.” It’s another one of J.D.’s songs to Veronica. This time it’s about how the convenience store 7-Eleven is the same everywhere because he moves around a lot. To him, 7-Eleven is like his home.

This musical is one of my absolute favorites because it’s so different from the other musicals that I have heard. It makes me so happy that something that started as a movie from 1989 and was made into a musical in 2014. With lines like “Bulimia is so ‘87” and “You’re a high school has-been waiting to happen, a future gas station attendant,” it’s a wonder that this musical isn’t more popular than what it is.