THE CIRCLE OR APPLE? 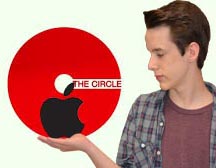 The movie “The Circle” will be released in one week. The movie is based off of a science fiction novel of the same name. The cast includes many sought after actors and actresses such as Tom Hanks, Emma Watson, John Boyega (notable for his role in Star Wars: The Force Awakens), and Patton Oswalt. Bill Paxton is also in the movie, but it was his final role, as he died in February of this year from complications following his heart surgery. One notable part about the story in the book and movie is that it imagines a world in which a social media corporation gains too much control and is somewhat evil. That provides for an interesting take on dystopia, and it relates to the rise of internet based companies. One nod to the real world is that it takes place in a campus that’s shaped like the outline of a circle, almost exactly like the building Apple has almost finished building. The movie is obviously exaggerated, but it could still provoke thought and discussions about the topic. “The Circle” mostly follows Mae, played by Emma Watson, as she gets a job at the world’s most powerful corporation. She’s encouraged by one of the founders, played by Tom Hanks, to engage in unethical experiments and she learns more about the inner workings of what they do. The book gives away the plot, but the movie adaptation could take a different turn. The book did well, and the number of high budget actors gives the movie high expectations. It will be interesting to see if the movie does as well.