The General Journal • May 2, 2017 • https://hhsgeneraljournal.com/5669/sports/editorial-the-truth-has-left-the-building/

EDITORIAL: THE TRUTH HAS LEFT THE BUILDING 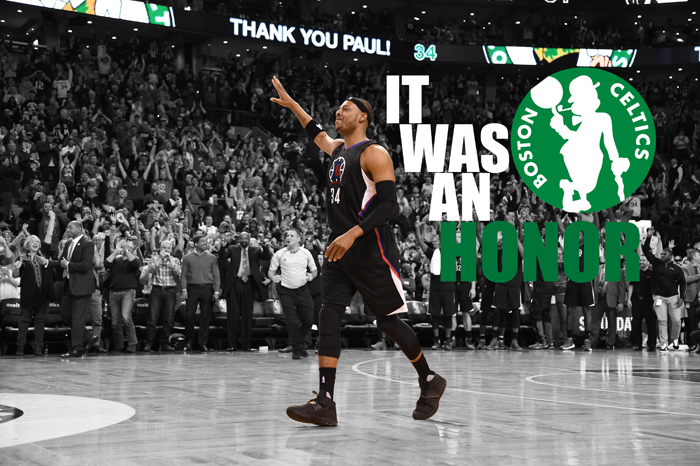 The day has finally come: the day eight-year-old Trevin never wanted to see. Paul Pierce is hanging it up and retiring from the NBA. Pierce has been in the league for 19 years now; he was drafted by the Boston Celtics in 1998. He spent the best parts of his career in Boston and became a fan favorite very quickly. I have grown up an avid Boston Celtics fan and remember watching Pierce just play lights out every night. I use to watch him and then go outside, grab a basketball, and try to mimic him and be like him. I still remember getting my very first Celtics jersey and it was the one and only, Paul Pierce #34. I wore that thing until it didn’t fit me anymore, and then a little longer. Pierce will always be my favorite player, and I am honestly devastated to see him go.

Pierce has been getting lots of slander from Internet trolls saying that he isn’t a legend, or that he is overrated. Obviously everyone is entitled to their opinion, but I just don’t understand this one. Paul Pierce has given his all every game he has played in his 19 year career. He finished his career with 26,397 points and 24,021 of those points came when he was on the Celtics. I started watching Pierce, or “The Truth’ as he was dubbed, back when I was very young and he became my favorite player very fast. I never wanted to see the day that Pierce wasn’t rocking a green and white jersey on the historical Celtics court. Sadly, that day came in 2013 as the Celtics traded Pierce away to the Brooklyn Nets. The trade was hard to swallow at first but now it is obvious that the Celtics won the deal as they freed up cap space and got a ton of draft picks. Since Pierce was traded, he has bounced around. He was with the Nets for one season, the Wizards for one season, and finished out the last two years of his career with the Los Angeles Clippers.

Pierce played his last game on Sunday, April 30 and it definitely didn’t come to end the way he wanted to. The Clippers got bounced from the playoffs in the first round by the Utah Jazz. Pierce is officially hanging it up and the Celtics have already confirmed that they will retire Pierce’s #34 one day. As a Celtic fan, I pray that Pierce signs a one day contract with the Celtics and retires with the team that he started it all with.