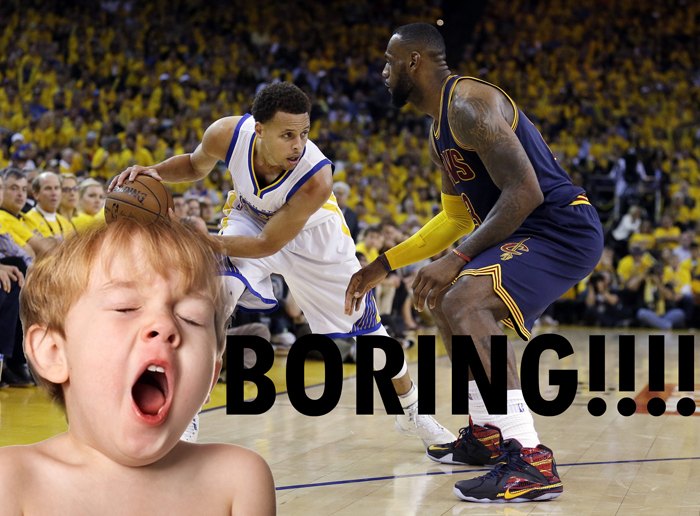 The talk of the NBA right now is all about the playoffs and who is going to play in the NBA Finals and claim the title. NBA Playoffs is the best time of the year for basketball fans like myself because the intensity of the players is just unmatched. They play for a purpose; they want to be the player to hoist that beautiful gold Larry O’Brien Trophy and call themselves champions. As most people know, LeBron has dominated the Eastern Conference pretty much the last decade. He has been to the finals the last six years, with two different teams, and it’s looking like he will be making it for the seventh time this year. The past two years LeBron has faced the Steph Curry led Golden State Warriors and everyone is expecting it to happen again for the third straight year. This is where all fans are starting uproar.

I don’t even know how many times I’ve seen people tweet something along the lines of “let’s just sim to the finals, these playoffs are boring.” Everyone seems to be very bored by this year’s playoffs because everyone already knows who will be in the finals: the Cavs and the Warriors. I can agree that this is getting old and we want to see a new finals matchup, but we’re getting the absolute two best teams playing. This isn’t the first time this has happened in the NBA; throughout the league’s history, this has been a trend. Back in the 50’s and 60’s the Boston Celtics owned the NBA as they won nine straight championships. Then back in the 80’s the Los Angeles Lakers and Boston Celtics owned the NBA and one of those teams played in every single finals every year. Then throughout the 90’s there were only four different teams to win a championship: the Bulls, Pistons, Rockets, and Spurs.

Now, I agree that it gets tiring watching the same teams play each other every year but the way to stop that is for the other teams to just get better and knock them off. Everyone calling the NBA boring now are still going to tune into the finals to see who will hoist that historical trophy.