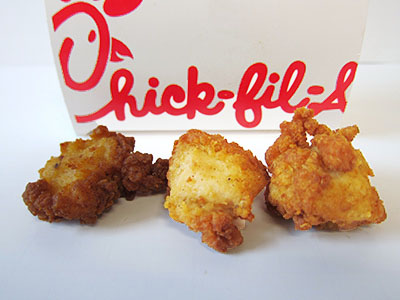 McDonald’s is known for having food you can purchase for cheap, as Chick-fil-A is an average-priced restaurant. McDonald’s is also questioned every day over the quality of their food, with their chicken nuggets being highly questioned about whether the chicken is even chicken! I personally would rather spend more money at Chick-fil-A and not have to worry about what I am eating. To truly enjoy the experience at Chick-fil-A, you get one of their known sauces, whether it be Polynesian or Chick-fil-A sauce. They are all amazing. If you go to McDonald’s, you will have to settle for the sweet and sour or the ranch. McDonald’s doesn’t even give you good sauce to cover up their bad chicken! McDonald’s is mainly raved about for their cheap prices rather than the taste of their food, whereas Chick-fil-A is raved about having great food. Don’t get me wrong: I love low-priced food! However, good quality food that is a little more expensive makes it way worth a few more dollars to me!

It’s safe to say that Chick-fil-A  is the better choice, so next time you are craving chicken nuggets, I would recommend stopping by Chick- fil-A instead of McDonalds!