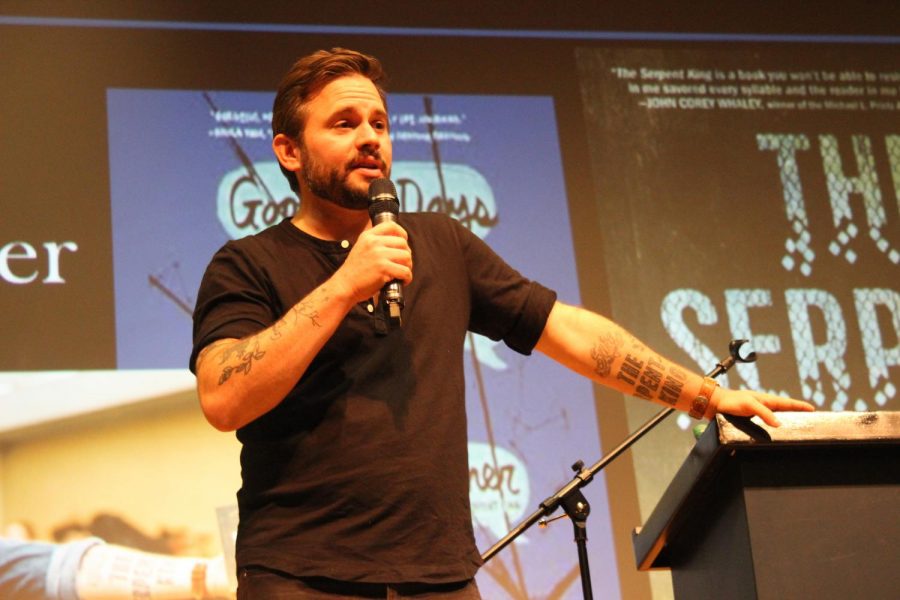 On September 15, the author Jeff Zentner (who wrote the novels “The Serpent King” and “Goodbye Days”) visited us here at HHS for a writing seminar with the book club and the creative writing club. He first arrived during second block, and the two clubs then began the writing seminar. I’m personally in both clubs, and it was apparent that he gave good advice about dialogue especially. Mrs. Sixto, the book club sponsor, explained to me that she first contacted Zentner over the summer after learning of his work through his book signing at Star Line Books. According to her, he “responded within five minutes.” She further explained that she loved two specific things that he said, “1: When writing dialogue, it’s so tempting to add adjectives and synonyms in your dialogue tags.” Mrs. Sixto appreciated that he encouraged writers to avoid these dialogue tags and unneeded words as much as possible. Jeff Zenter explained more about this practice through a writing exercise that he did; he asked people to write a conversation without the use of any dialogue tags, and they later read some aloud. “2: Write about what you know, but write about what you’re curious about and interested in.” The majority of us have probably been told to write about what you know, but Zenter took this one step farther in his explanations of his creative process. Senior Moses Guerrini also had positive comments about Zentner’s visit, saying, “I loved meeting Jeff Zenter. He was very different from other authors that we’ve had visit. His writing class was wonderful, and I loved that he talked about dialogue. In my own writing, I usually shy away from dialogue, so I’m glad that he talked about it.”