A PLEASURE TO BURN 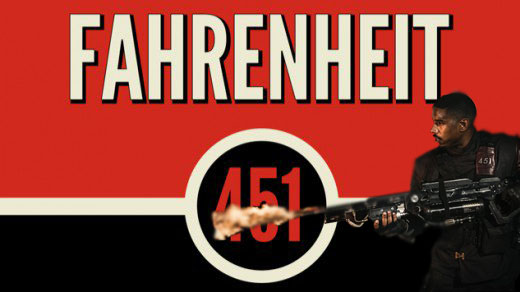 HBO films is almost done developing a movie adaptation of Ray Bradbury’s “Fahrenheit 451.” It’s been in the works for over a decade. The last time it was adapted was in 1966 with Francois Truffaut’s film starring Oskar Werner and Cyril Cusack. For those who don’t know, “Fahrenheit 451” is about a high-tech dystopian future where firemen burn books instead of putting out fires. The new movie will be written and directed by Ramin Bahrani (“99 Homes”), with Michael B. Jordan (“Black Panther”) playing the lead role of Fireman Guy Montag and Michael Shannon (“Shape Of Water”) as his boss, Captain Beatty. Ramin Bahrani said in a press release, “I have always loved Ray Bradbury’s prophetic novel… Two years ago, as I looked around me, it seemed like the ideal time to do a modern interpretation.” The recently released (and very brief) trailer is mostly a shot of a burning book in a fireman’s hand, which is thrown into a pile that includes “Huckleberry Finn,” “Crime And Punishment,” “Lolita,” and “The Catcher In The Rye.” The trailer doesn’t give us a look at any of the characters, but some previously released images show Guy Montag and Captain Beatty. The only piece of info given in the trailer is that the movie will be arriving sometime this spring. Sofia Boutella, Laura Harrier, Keir Dullea, Martin Donovan, Grace Lynn Kung, and Jane Moffatt will also star in the movie.