NEW ALBUM ON THE RISE 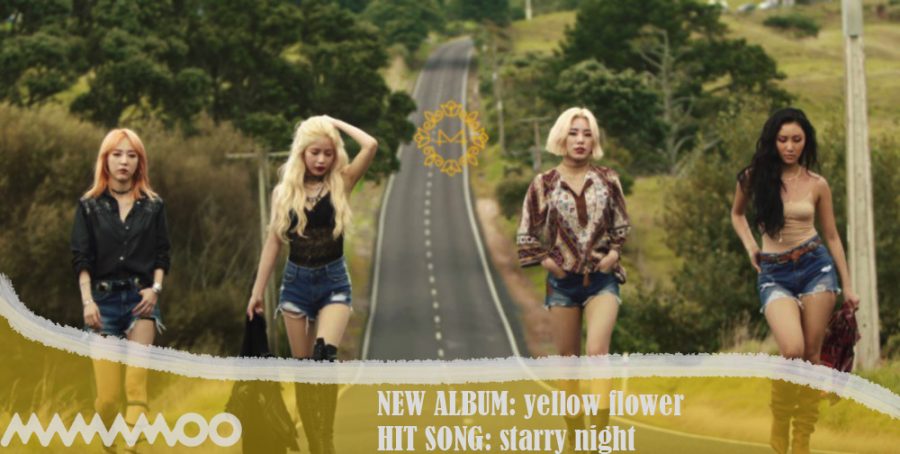 Korean music is finally finding massive amounts of fans over the ocean. BTS is the most well known band here in America, but the girl group Mamamoo deserves to be heard as well. The band consists of Moonbyul, Solar, Hwasa, and Whee In (my bias). Band leader, Solar, had the privilege of writing the song “Star Wind Flower Sun” that set the very intimate tone of the album. Their freshly released mini album Yellow Flower introduces a new, more mature band, so the songs are much more raw and on a lower octave. The low hums and harmony hangs on your ears as they lay you into a trance.

“Starry Night” waves in heavy, slept on vocals that are very reminiscent of their previous song “Don’t be Happy,” but brings in a new spanish vibe from the strings. The song starts on deep, raspy notes from Hwasa that beckons Solar and Whee In’s vocal riffs. While the music gets faster, louder, and the girls gravel out quick notes, it grows your anticipation, inviting you to the hard hitting part of the song, but the relief comes in an unexpected soft sting from Whee In. This soft yet powerful note sets the sequence for the rest of the song as a new level of harmonization is handed to you. The normally energetic Moonbyul softly whispers her wisps of raps, so the quiet tone makes them more emotional, which adds to the intimacy. The song rises and falls as naturally as your chest, but the intricate vocals, tingling keys, and staple strings are enough to leave you breathless. It contains all the elements of an award winning song that you deserve to hear.