GOING TO THE POLLS 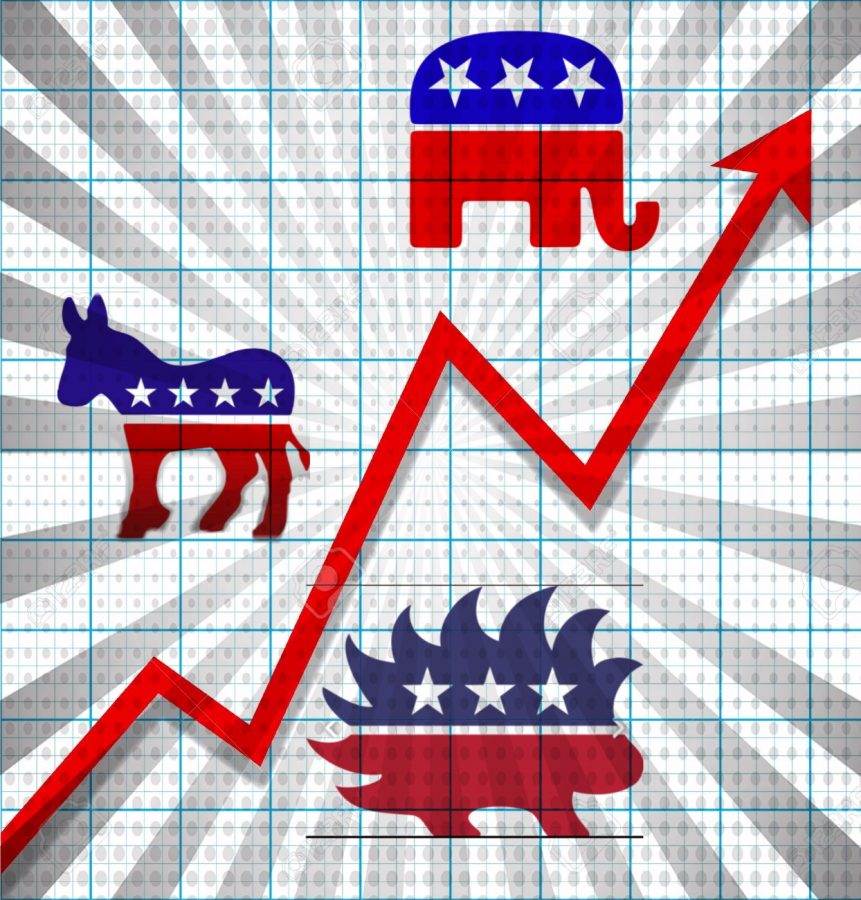 Going to the polls to vote for a new president is a process that Americans have been participating in for almost three centuries. Our country was founded, after all, so that the people could have every opportunity to participate in the government. The president and their party becomes our trademark – the national face of America – for the next four to eight years, so it is an enormous decision.

The election process not only involves citizens but the electoral college as well. For a candidate to win the election, they must receive 270 electoral votes or more.

In the early eighteen hundreds, voter turnout was between fifty-seven and fifty-five percent of eligible voters until 1840 when turnout suddenly spiked drastically. Turnout shot from mid-fifties to a whopping 80.2%. Whig Party member William Harrison was elected into office, beating his Democratic opponent, Martin Van Buren, by 174 electoral votes; it was 234 to 60. The Whig party later joined the Democratic party, ironically, and is now effectively extinct.

Voter turnout continued to steadily fluctuate in the 70-80% range until 1912, when voter turnout hit a new low: 58.8%. Democratic President Woodrow Wilson was elected into office, replacing the former president who had been in office for the full eight years: Theodore Roosevelt. Roosevelt had introduced charisma as a factor in the political arena for the first time, and many people, according to some sources, voted him in largely on account of his personality.

Although he represented the Republican party, he was strongly for bigger, more controlling government and international intervention, which are not traditionally Republican values. He coined the phrase, “Speak softly and carry a big stick,” as he believed America should do, and manipulated businesses to carry America through the Great Depression. The former president even initiated the Progressive Party. He was loved by many, so the next election was likely a tough time for the people.

When Wilson was elected into office, he stuck to Democratic values, having a highly idealistic outlook, which sometimes complicated things for America. He tried equalizing things in the international field, putting much effort into promoting and supporting Latin America while paying less attention to the United States. He focused intensely on foreign policy. During the short period of neutrality before entering World War One, President Wilson refused to threaten arms embargo with Britain, even though Germany’s wrath was threatening America. While Wilson fervently promoted humanitarian values in other countries in Latin America, he ignored the civil rights issues running rampant in his own country; he supported segregation and seemed completely oblivious, if not supportive, of oppression of African Americans.

After Wilson’s election, voter turnout went up by a little but quickly hit a new low point with only 49.2% voting in the 1920 election and then slightly less in ‘24.

From there, the voter turnout stayed around the 50-60% area until our most recent election, which (depending on whose statistics you use) had around 58% turnout.

Republican candidate Donald J. Trump (now President) and Democratic candidate Hillary Clinton had one of the most infamous election seasons ever. Both candidates had some of the lowest approval ratings throughout the campaign in the history of America. Trump won with 304 electoral votes, and Clinton lost with 227 votes. Although it was not a particularly low voter turnout, one might have thought it would be higher given all of the surrounding controversy. Trump has now been in office around twenty months and has enforced Obama’s Red Line, recognized Jerusalem as Israel’s capital, withdrawn from the Paris climate agreement, obtained allies for NATO’s financial needs, practically eliminated the Islamic State’s corporal caliphate by removing Obama’s constraints on the military, and unleashed economic growth by enacting tax and regulatory reform, just to name the highlights. Of course, he has made many mistakes and will continue to, as every president has. We will see how his presidency goes; so far, it has been logistically productive. While many do not agree with his rhetoric, his actions will ultimately prove his intention and his worth to the country.

The right to vote earned by our forefathers centuries ago is exercised by many eligible Americans who wish to participate in big decisions that affect them to this day. Though turnout has fluctuated over the many years of elections, we still have this privilege that America’s founding fathers wrote into our constitution. The extent of citizen involvement is one of the many fundamental things that has separated us as a nation and will surely continue to for centuries to come.