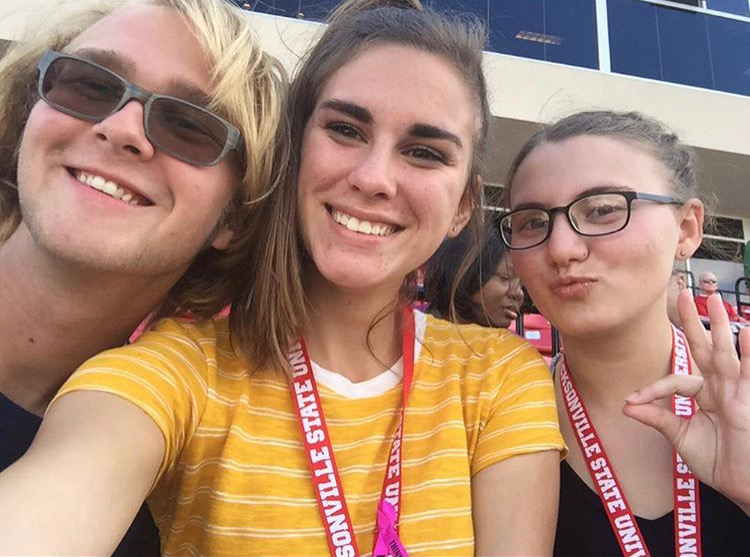 This past Saturday, October 13, Jacksonville State University had their annual preview day for anyone interested in going to the school. Personally, I’ve known I wanted to go there since eighth grade, so of course I went. The experience was amazing, and I’ve never been more sure of my choice to go there. My best friend Abbi was the one who told me about it a couple of months ago. She graduated last year, and we’ve both wanted to go to college at JSU. Now we can go together since she took a year off from school. Our other friend Ryan has been looking into going to the school for a while, but he had also been considering the University of Georgia primarily. Recently, JSU seems to be more of a priority to Ryan, so it’ll be amazing if we can all three go together.

The day started out at 9 AM with a name tag to identify each student. Parents were, of course, welcome. I did go with down there with Abbi and Ryan, and we were, as usual, late. We went to an auditorium after getting a name tag and a small speech from the president. The cheerleaders came out and did a routine. Then we went into a room with a bunch of tables set up for all of the departments in the school for us to see what we were interested in. I met the head drum major for the band because of course I’m going as a music major. Afterwards, my mom and I had a campus tour. We ate lunch in the cafe, as they call it, with Abbi, Ryan, and a couple friends that are freshmen at Jacksonville. Ryan and I went to look at the dorms after lunch. We rushed to hear the band warm up because they’re amazing. The game was free to anyone there for preview day, so of course we went to that too, only to leave after half time because we were only there for the band. I got a “COCKY” t-shirt on the way out. Overall, my day was amazing, and I can’t wait to be there next year.