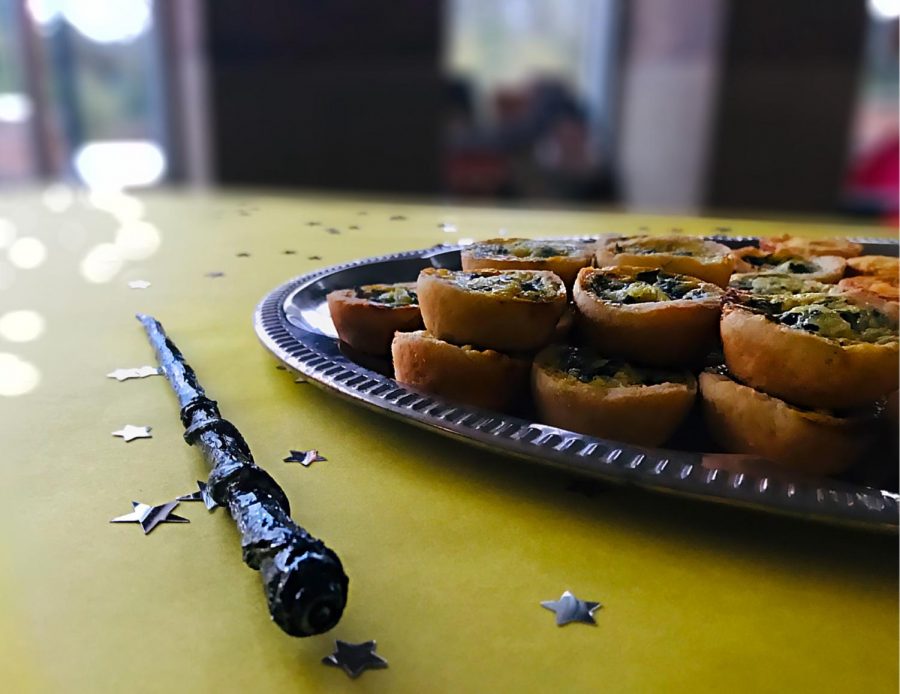 Last Friday, around ninety students and several adults — nearly a hundred people in all — came to the school at five o’clock p.m. for the event and were allowed to stay till ten at night. It was the second time the Book Club had hosted the celebration, and it was greatly improved from the year before.

“Since it was the first time we held the lock-in,” discloses Mrs. Sixto, head of Book Club, “just around thirty to forty people came. This year, more people know about it; I think that’s part of what made it more popular.”

She went on to mention that there were also many more updated activities than there had been the initial year, including sorting-hat making, slime-making, a photo booth, and a mini Quidditch game. The first year, some of the only activities available were cupcake and wand making.

As you approached the library door, you handed over your ticket and were allowed to enter through brick-like doors, resembling the scene on Platform 9 3’4 where Harry first enters the Wizarding World.

Inside, there were stringed lights and glowing candles, a great Whomping Willow Tree on your left, and a sorting hat sitting among four house banners hanging on the main desk.

“Hogwarts students” filled the room, some occupied with wand-making, conversation, or engaged in some other activity; many were snacking and sitting in front of the large screen Harry Potter movie playing.

On all the computers, the Pottermore website (the official website for the Harry Potter franchise) was set up and ready for attendees to explore, create an account, discover their patronus, house, and more.

It was great fun meeting people who shared your own house (go Gryffindor), and finding out what house others belonged to; the vast majority were Hufflepuffs.

Harry Potter fans had an opportunity to meet many others; even if you’re not a fan, it’s definitely worth going.

The snack selection was quite diverse and gave plenty of nods to the Harry Potter series. It included Golden Snitch chocolates, Butterbeer cupcakes, chocolate frogs, a Slytherin Snake made of sandwiches, Potion Punch, and much more.

As a book club member, I can say the preparation process was a little stressful, but very fun. I only played a small part; all of the volunteering club members worked hard to build ornate props and decorations, prepare unique, delicious edibles, and create the impressive experience for all those who came.

I, as a freshman, am very glad I get to attend and plan for all four years, and I can’t wait until the time comes around again.