WHY ROSS IS THE WORST 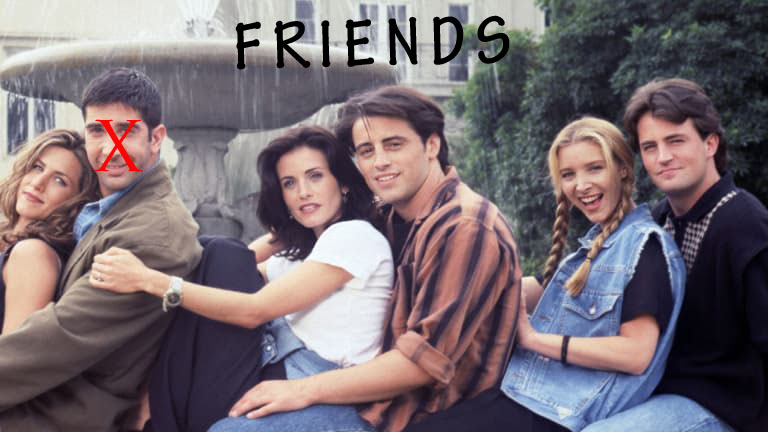 If you are not aware of the show “Friends” or haven’t seen at least one episode, you are missing out. This television show aired from 1994 to 2004. “Friends” is a sitcom which means that each episode lasts around 25 minutes. The show consists of six main characters: Monica Geller, Chandler Bing, Joey Tribbiani, Phoebe Buffay, Rachel Green, and Ross Geller. The six all live in New York City; Rachel and Monica live in an apartment across from Joey and Chandler. Although Phoebe and Ross do not live with the rest of them, all of them manage to end up at either Monica’s apartment or at the coffee house Central Perk.

I am a huge fan of all of the characters except Ross and sometimes Rachel. Chandler is goofy, awkward, and very sarcastic. He absolutely hates his job as an executive in statistical analysis and data reconfiguration. He has many failed relationships, and is known for having bad luck. Monica is Ross’ sister and Rachel’s roommate. She plays the role of the mother in group, as she is a perfectionist, very competitive, and has frequent OCD tendencies. She has many hopeful relationships throughout the show, and at certain points, there is speculation of who she should have ended up with. Phoebe is a self-taught musician who performs her goofy and very truthful songs. Phoebe had a rough childhood, and viewers get to see her meet her family sporadically throughout the show’s run. Her quirkiness always makes her relationships interesting. Joey is an actor, although he struggles to find roles. He also has a strong passion for food. Joey is very flirtatious and never has a serious relationship, but he is very caring, innocent, and always has good intentions. Rachel moves in with Monica when she runs out on her own wedding with a man she did not really love. Rachel has many relationships throughout the series, and does not get into her final relationship until the series finale. Coming into Monica’s, she had everything given to her. She never had a job or had to pay for anything on her own. To begin making money, she found a waitressing job at Central Perk, which she believes is foolish at first. Throughout the series, she becomes more determined to work and make something of herself. She gets more jobs of higher levels throughout the series.

Finally, Ross is Monica’s older brother, who is also a paleontologist, and later becomes a professor of paleontology. At the beginning of the show, we find out that Ross has just recently gotten divorced because his ex-wife Carol is a lesbian. Not only does Ross get divorced once, but he does two more times as well. Although the first divorce was not his fault, the second one was. While at the wedding with his second bride, Emily, Ross just happens to say the wrong name at the altar. Emily becomes angry with him, and although they finished the wedding and got married, the two did not last long. Among his divorces, Ross has many other failed relationship throughout the show. Ross is my least favorite character because to me he just isn’t funny. He has always acted sort of aggressive as well. Ross always seemed overly possessive of the woman he was seeing. Once one of them became friends with another man, he would become overly jealous and would cause a scene while she was at work. Monica used to be overweight in high school, and Ross teased her for her weight and never stopped his friend from doing the same. The third time he got married, they were drunk, and once they were sober, he refused to divorce her. Not only was this disrespectful, but Ross was also disrespectful in plenty of other ways. To decide on which woman to choose, Ross created a pro-con list. He named off plenty of hateful things, and once the girl found the list, he was surprised that she would not forgive him sooner. Ross also made a hate club for the same girl when they were in high school, even though he was in love with her. Although the show was set in the 90s, Ross seemed homophobic at certain points in the show. He also was a lot ruder to the other characters than anyone else was. He always made them feel like they did something wrong.

Overall, Ross was rude to others when it was unnecessary. He always expected something from everyone, especially women. On top of that, he just wasn’t as funny as the other characters. This is nothing against David Schwimmer, the actor who portrays Ross, for I am a huge fan of each cast member. There were many things the writers could have done to make Ross a better character, but without him, many of my favorite story lines would not have happened.