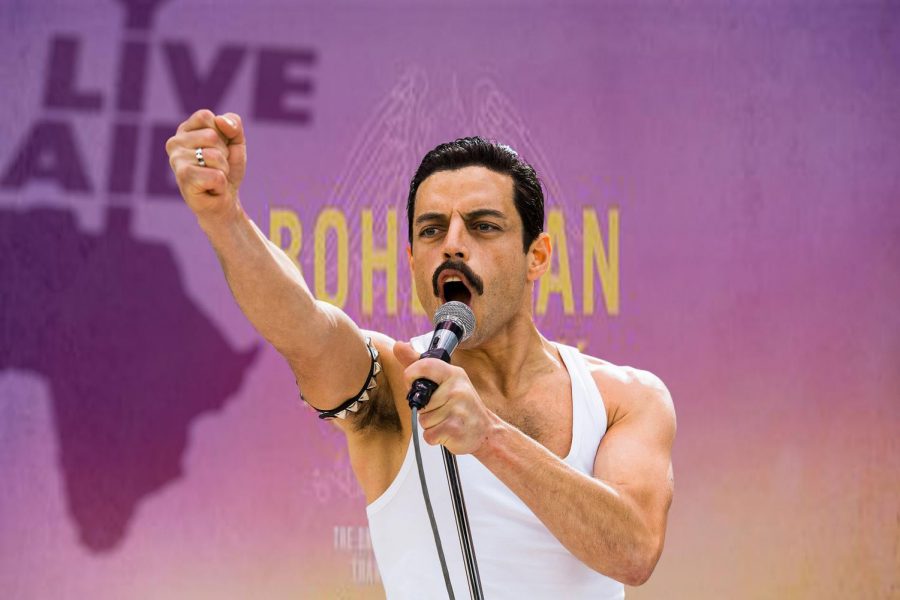 “Bohemian Rhapsody” is the long overdue biopic of the legendary british rock group Queen and focuses mainly on the late lead singer Freddie Mercury. It spans from the group’s formation in 1970 leading up to the group’s legendary performance at Live Aid in 1985. While this biopic focuses on Queen, the second half of the film focuses primarily on Freddie Mercury’s drug abuse and other lifestyle proclivities through which he contracted AIDS.

Rami Malek as Freddie Mercury, easily the most buzzed about performance from this film, is phenomenal. I would almost equate it to Daniel Day-Lewis’ performance as Daniel Plainview in Paul Thomas Anderson’s “There Will Be Blood.” Malek is fully capable of realizing Mercury’s mannerisms, movements, speech dialect, etc.

The makeup and costuming for this film is also a phenomenal part of this film. Actors for the role of the Queen band members look like the physical embodiment of them. . . including Mercury’s protruding teeth in all their glory.

There are, however, a few style choices in this film that detract from the film. There’s a few slow-motion sequences at the weirdest times, awkward scene splicing that involves Freddie Mercury going to a red lit club, and when Freddie learns that he has contracted AIDS, the Queen song “Who Wants to Live Forever” plays in the background.

“Bohemian Rhapsody” is best viewed in IMAX in order to best appreciate the music the way Queen would want us to hear it. Most notably during the recreation of the band’s performance at Live Aid and when the band creates their noteworthy song “Bohemian Rhapsody.”

Overall, while the film may not be the Oscar-contender Fox was hoping for, it is one of the strongest films to come out this year and for that “Bohemian Rhapsody” receives four out of five stars.