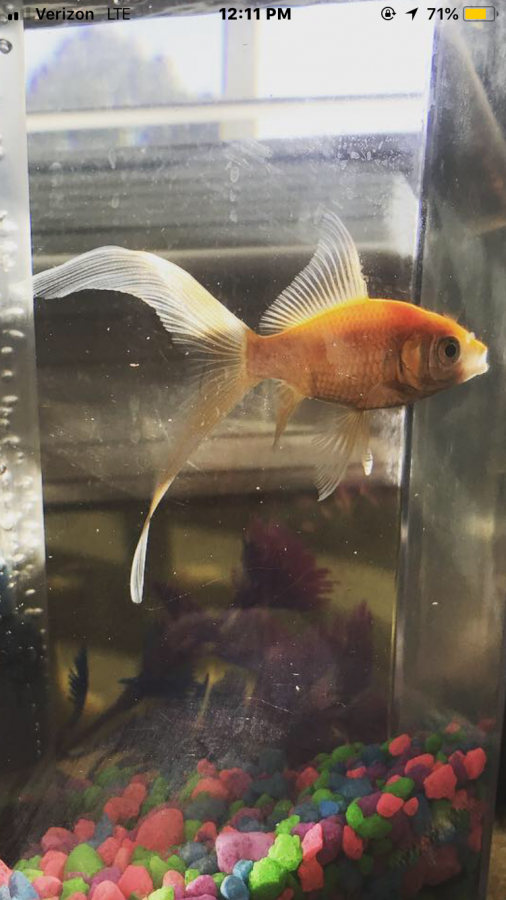 I have a pet goldfish that I love very much named Taco. I’ve never really had much luck when it comes to fish, but Taco seems to be doing very well. My sophomore year, I had gotten a couple of glowfish to wow my class on a genetic engineering project. Mainly, I had just used it as an excuse to get fish. Both of those fish didn’t make it through the first night, so I got more. Those lasted a couple of days, just long enough for my project. Mrs. Wilson, my biology teacher at the time, gave me a lot of fish from her tank because it was getting really overpopulated. I accidentally killed a couple trying to clean out the tank, and the others all died in one night either because it was too cold or they didn’t have enough air supply.

Taco came a while later. During spring of my junior year, my friends and I decided to play a prank on my friend’s boyfriend by messing up his car. We got sticky notes, streamers, saran wrap, little toy soldiers to put inside, and, lastly, a goldfish; we did a great job on his car. We named the fish Taco because the kid’s last name was similar (specifically, we called it Stand-on-a-taco), and we always told the little kids at church that this guy’s name was Taco. Naturally, we named the goldfish after him since it was for his prank. The next morning, when the fish somehow survived, the kid didn’t want it. I said I had a tank and could take care of it, so he let me have it. My mom wasn’t thrilled, but I had everything to keep him, so she couldn’t do much. I’ve loved having him and I would highly recommend a goldfish as an easy pet.