RACE TO THE TOP 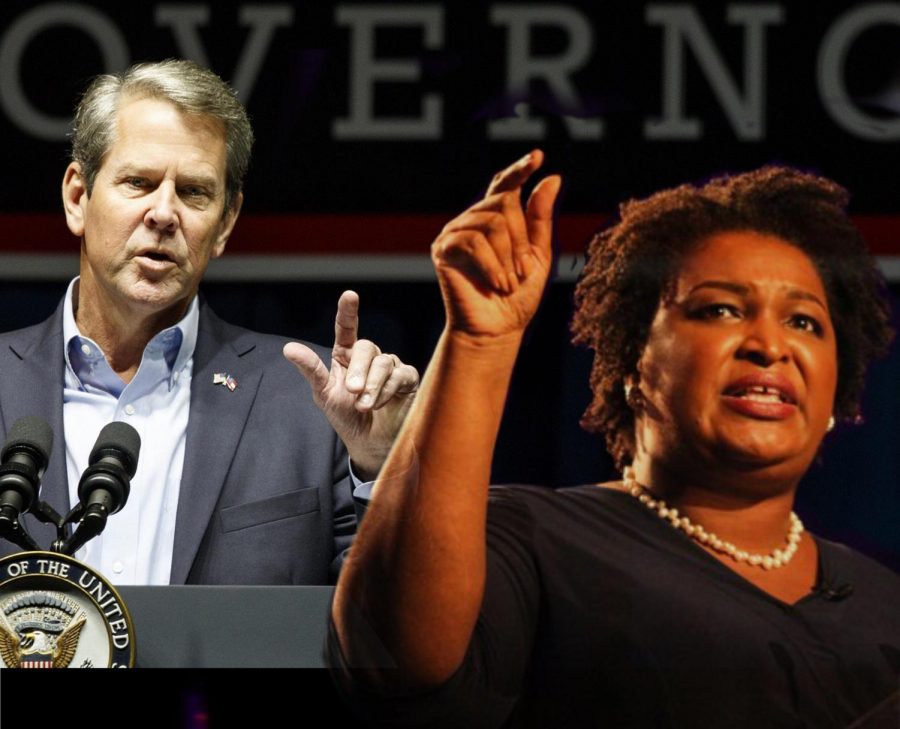 The controversial battle for the office of Georgia governor between Brian Kemp and Stacey Abrams has been the topic of heated discussion among Georgians for several weeks. Before recently, while driving in the state, you probably cruised past a few “Kemp” or “Abrams” signs in your peripheral vision, not thinking much of it; you may have absent-mindedly skipped past several of their commercials preceding Youtube videos and TV shows; now the politicians on those signs and videos propagate are all anyone has been talking about. Oh, and Ted Metz is there too.

So what’s the story beneath the propaganda, rumors, and media’s distortion?

Before considering either candidate, one should look into their background.

Businessman and Republican candidate Brian Kemp, 53, is a member of the Emmanuel Episcopal Church in Athens, a graduate from the University of Georgia with a Bachelor of Science in Agriculture, and former Secretary of State (2003-2007). “Secretary Kemp,” the State Properties Commission (gspc.georgia.gov) discloses concerning Kemp, “[He] has helped found and develop many small businesses … he is the owner of Kemp Properties, a small business specializing in real estate investments and property management … he led efforts to cut wasteful spending an streamline government, cut red tape and support small business growth, protect the HOPE Scholarship, preserve our water resources and green space, and promote early learning efforts.”

Kemp has endorsed the GA National Federation of Independent Business, GA Chamber of Commerce, National Rifle Association and Political Victory Fund, GA Sports Shooting Association, and GA Conservation Voters. He has made many speeches concerning jobs, cutting costs, rural areas, small businesses, public safety, gangs, and education and literacy. “The most important issue facing Georgia today is the economy,” Kemp stated in a speech regarding creating jobs. In another speech, he urged, “Give rural communities the same opportunities as the rest of the state.” On August 14th of 2018, he made a speech claiming, “I will build on Nathan Deal’s legacy and fully fund public school education. We must invest in our future today and ensure that all students have access to quality education — no matter their zip code … my opponent … is more concerned with funding her political career…”

Brian Kemp’s facebook page describes him as a “Conservative Businessman Fighting for Georgia.” On his website he describes a concise “Four-Point Plan to Put Georgians First,” including the following steps: (1) Make Georgia #1 for Small Businesses, (2) Reform State Government, (3) Strengthening Rural Georgia, and (4) Put Georgia First; the website provides the details of each of these points. He, according to media.ethics.ga.gov, received about 20 million dollars and spent around 16 million on his campaign in the election.

Next, Democratic candidate Stacey Abrams, 44, is a member of the United Methodist church, graduated with a degree in Interdisciplinary Studies (political science, economics, and sociology), was the House Minority leader for the GA General Assembly, and State Representative for the 89th House District. She’s also written eight romantic suspense novels under the pen-name Selena Montgomery – seriously, Google it.

“I am the most qualified candidate running,” Abrams asserted on CNN, “if you look at my academic background, my work history. I have been deputy city attorney. I was the Democratic leader for seven years. I have been successful as a businesswoman, as a writer, and as a tax attorney. I know what I’m talking about, and I have the plans to prove it.”

Abrams expressed the intention to provide “thousands more jobs, thousands of good-paying jobs” as well as “access to healthcare coverage” under Obamacare and without raising taxes.

As for gun legislation, Abrams explains, “Semi-automatic weapons have to be put under a certain level of responsible control.” In 2016 Abrams sponsored House Bill 731, which would “prohibit the possession, sale, transport, distribution, or use of certain assault weapons, large capacity magazines, armor-piercing bullets, and incendiary .50 caliber bullets” (lines 2-4). During the interview, when questioned about it, she claimed that, “Legislation in the state legislature is about starting the conversation,” not necessarily actually passing the laws.

Abrams’s involvement in criminal justice highlights community policing, due process, centers around criminal reform as opposed to punishment. She intends to enforce this “through the elimination of cash bail … increased diversion and reentry programs.” As for voting rights, she plans to make voter registration more convenient through replacement of outdated technology, vetoing gerrymandering districts, and promoting government transparency with publicized schedules and town hall meetings.

You can find out more about both Kemp’s and Abrams’ positions, plans, and records at their websites, kempforgovernor.com and staceyabrams.com.

During the election, Kemp rose to earn over 50.3% of the votes, while Abrams obtained 48.%, and Mets (that other one, the libertarian) got the remaining 1%. The close numbers lingered for days, and Kemp declared victory, supported by President Trump. Stacey Abrams, however, refused to accept defeat, claiming there were discrepancies in the system, or “voter suppression”.

Kemp’s spokeswoman states that 22,000 votes had yet to be processed. Nevertheless, it was mathematically impossible, even if Abrams got 100% of those votes, to change the end result of the election. Abrams demanded a runoff election (basically a recount of votes).

The NAACP, a racial equality activism organization that originated during the Civil Rights Movement, got involved, appealing in court to extend the voting hours in certain areas of Georgia, including Gwinnett County and three locations within Atlanta, which, contrary to the rest of Georgia which is predominantly Republican (besides the Columbus, Augusta, and Savannah areas), is overwhelmingly Democratic.

“The essence of our democracy is at stake and the NAACP is paying close attention to the continuous flow of irregularities and voter suppression issues emerging out of Georgia,” said NAACP President Derrick Johnson. “We are working hand in hand with our Georgia State NAACP and its President Phyllis T. Blake in ensuring the integrity of our vote is not compromised.”

Throughout Georgia on Election Day, “Polling stations open at 7 a.m. and close at 7 p.m. If you can’t vote during those times, you can either vote early or send in an absentee ballot,” according to the Georgia.gov website. The times in the districts affected by the NAACP’s appeal’s voting times were extended from seven p.m. to 10, giving those residents two extra hours to vote.

No one has said for sure who is our new governor as of now, but it looks like the numbers are in favor of Brian Kemp. We’ll see what happens, but for now, the numbers stand; I implore everyone capable of voting to do so educated on the background and beliefs of their chosen candidate.