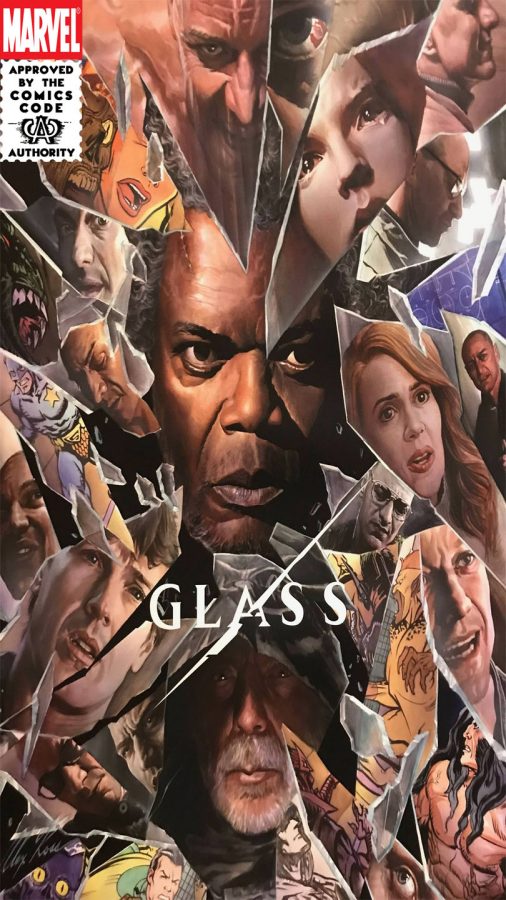 In order to give M. Night Shyamalan’s newest film, “Glass,” a comprehensive and accurate review, there must be discussions of certain events and twists in the film that could be considered as “spoilers.” Reader discretion is advised.

19 years ago, M. Night Shyamalan followed up his smash hit “The Sixth Sense” with another twisty, supernatural film starring Bruce Willis and Samuel L. Jackson. At least, that’s what the film was marketed as. In actuality, Shyamalan’s twist in the film was not that “Unbreakable” was just another psychological thriller but was an origin story for a superhero. The series was put on a sixteen year hiatus until the release of another Shyamalan film: “Split.” The film surprised audiences when in its final moments Bruce Willis made a surprise cameo confirming that ‘Split” and “Unbreakable” were set in the same universe. The sequel, and trilogy finale, “Glass” was announced shortly after. Flash-forward to 2019, and Shyamalan has finally finished (maybe?) his comic book trilogy, which many are referring to as the “Eastrail 177 Trilogy” (Eastrail 177 being the train that crashed in the beginning of “Unbreakable”).

“Glass” takes place just a few weeks after the events of “Split’ where we learn that since becoming a superhero, David Dunn has been working as a security contractor and performing vigilante acts on the side with the help of his son. Kevin Wendell Crumb has again kidnapped another group of high school girls with the intention of feeding them to one of his 24 personalities known as “The Beast.” This sets a collision course for the two. Dunn eventually tracks down The Beast to the factory where the girls are being kept. After a brief confrontation, Dunn and Crumb are caught by police and are sent to a mental institution where a psychologist, played by Sarah Paulson, tries to convince the two (along with Jackson’s Mr. Glass) that their belief that they are superheroes/supervillains is all in their heads and can be explained with logic. They are nothing special.

“Unbreakable” was released in 2000 and was very ahead of its time. It was released before the Sam Raimi “Spider-Man” films and before the gritty and grounded Christopher Nolan “Dark Knight Trilogy” and was the perfect deconstruction of the superhero origin story. Now, 19 years later, “Glass” is released in a world filled with the Marvel Cinematic Universe, the DCEU, the universe Sony is trying to kickstart with “Venom,” and numerous other comic book films and TV series including “Hellboy,” “Legends of Tomorrow,” and the upcoming HBO show “Watchmen.”

“Glass” functions as both a deconstruction of comic book tropes and a critique of those same stories. This leads to some twists in the film that I feel mixed on. The biggest is that Sarah Paulson’s Dr. Ellie Staple works for a secret organization whose interests are in suppressing both superheros and villians through any means necessary in order to keep order balanced in the world. It’s a very unnecessary twist that frankly felt like it didn’t belong in this film. Shyamalan, an avid comic fan, hopefully made the twist this way intentionally. If he’s trying to critique comic books for frequently using a secret organization (think the Court of Owls from the Batman comics) as a scapegoat and points out how unnecessary this is, then it works. If not, well, that’s a twist that shouldn’t have made the final cut. Another thing that Shyamalan does is set up future sequels . . . even though he’s said no to making any future installments in this world that he’s built. The grand twist as you could call it is that “Glass” is not some singular story in which the hero and villain  square off with only one victor. It is, instead, an origin story for all the superheros and villains that will come as a part of Mr. Glass’ masterplan. As we learn in the film, Mr. Glass’ ultimate plan was to have footage of Crumb and Dunn using their superpowers live streamed for the whole world to see. After achieving the goal, we see the video has become trending with it popping up on social media and on a national news station fashioned like CNN. I thought it was an interesting twist in the context of our world populated with films like “Black Panther” and “Suicide Squad” but wasn’t true to the spirit of the franchise. These films have largely been realistic portrayals of comic book story arcs so to see a more fantastical element thrown into it was a little off-putting.

“Glass” is a film that will probably make audiences frustrated (it clearly already has, seeing the reactions to the film) because the trailers set it up as one thing when it’s really something else. The trailers would have you believe that “Glass” is an action packed superhero where we’ll finally be able to see Bruce Willis and James McAvoy in a grand final confrontation. While there is definitely more action in “Glass” than “Unbreakable” and “Split” combined, it’s only during the first and last 15 minutes of the film. The two fight scene only serve as bookends for a an extended act set in a mental institution where Ellie Staple uses logic and reason to convince Dunn, Crumb, and Mr. Glass that they are not the superheros and villains they believe themselves to be. Shyamalan uses clips from “Unbreakable” and “Split” and shows them in a new perspective in order to have both the characters and audience start to question what they believe to be true. For example, in the conclusion for “Split,” The Beast is shot twice at point blank range with a shotgun (without taking much damage) and is able to bend steel bars. Kevin’s personalities credit The Beast’s powers for doing this. But, Dr. Staple points out that the shotgun shells were old and stored in a moisture filled environment with many of the pellets hitting the steel bars when fired. In addition, the steel bars were put up in the late 1800s and Dr. Staple herself was able to bend the steel bars when she put a wrench between the bars and pulled. If this doesn’t sound interesting to you in the slightest then “Glass” isn’t for you. If you do, then “Glass” will provide some interesting food for thought.

To get the obvious out of the way, James McAvoy is something to behold . . . again. I think his performance trumps the one he gave in “Split.” Unlike the latter, McAvoy is not just working with only a handful of Crumb’s  personalities: he portrays all 24 of them. When the audience can easily identify which personality is taking the spotlight based purely off the mannerisms and before a single word is spoken, you know that the actor/actress is doing something incredible.

Bruce Willis and Samuel L. Jackson are serviceable in their roles. They’re not bad by any means; it’s just that they aren’t really given much to do, especially Bruce Willis. He is swept under the rug once he ends up in the institution. Which is a little disappointing, but understandable given the success of “Split” (so the creative team wanted the film to focus heavily on Kevin) and the state of Bruce Willis’ career. (Let’s be honest with one another. His last good performance was in “Red,” which was released in 2010). Samuel L. Jackson sits out a lot of this movie. Literally. Mr. Glass is confined to a wheelchair for the entire film and doesn’t speak for half of it (the reason why is made evident towards the end). I do wish we had gotten more of Anya Taylor-Joy and Spencer Treat Clark. I think their dynamic was rather understated considering how crucial they became at the end.

I highly recommend “Glass.” Does it have issues? Yes. Is it good? Yes. It bothers me that we live in a world where “Aquaman” and “Spider-Man: Into The Spider-verse” receive a more positive reception than “Glass.” I will say that it is essential that you watch “Unbreakable” and “Split” before seeing “Glass,” or there will be a lot in this film that  will mean absolutely nothing to you but should.