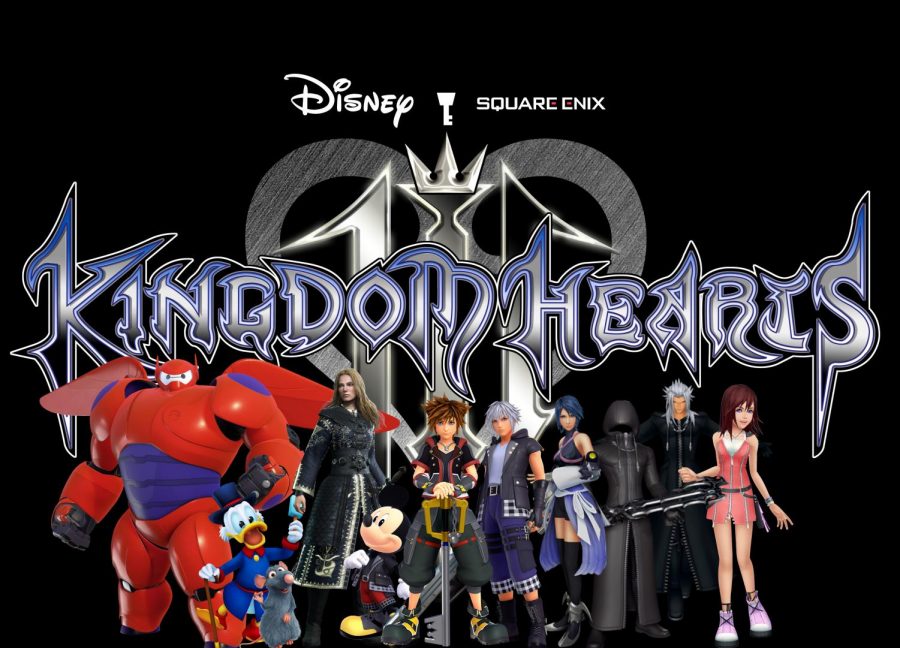 Released on January 29, “Kingdom Hearts 3” is the newest installment in the Disney/”Final Fantasy”-crossover video game franchise. It was a long journey for fans of the franchise to finally see how the franchise would end. With “Kingdom Hearts 2” being released in 2004, fans had to satisfy their craving for more romps through Disney worlds by playing the spinoff Nintendo DS and Gameboy games, an app, and the various collections of the works with the best being the 2014 edition labeled by developer Square Enix as the “1.5 + 2.5 Remix.” Set a few years after the events of “Kingdom Hearts 2,” Sora is still trying to reclaim his powers that were stripped of him by the leader of the villainous Organization 13. Alongside him are two iconic Disney characters: Donald and Goofy. Together, the group traverses through various worlds inspired by Disney films. “Kingdom Hearts 3” has the team travel to new worlds including those from “Monsters, Inc.,” “Tangled,” and “Big Hero 6” while also returning to familiar locations from the previous games including the worlds from “Hercules” and “The Pirates of The Caribbean.”

For an eighteen-year-old franchise, “Kingdom Hearts 3” is able to pull off some new tricks while still remaining true to what the fans have come to know and love since first being introduced to the franchise in 2001. Sora now has the ability to summon “attractions.” These being neon-tinged ride vehicles from the various Disney Parks. Players can blow heartless, the enemies, to pieces with the vehicle from “Buzz Lightyear’s Space Ranger Spin” in Walt Disney World, completely wipe out enemies with the tea cups from “Mad Hatter’s Tea Party,” and can propel flares towards the toughest of enemies on the train from “Big Thunder Mountain Railroad.” I never thought I would get so much satisfaction out of using ride vehicles to commit a genocide of heartless, yet, I did. Also, what made me happy, was that Square Enix put in the option to go around and take photos of Hidden Mickeys, or as they’re referred to in the game “Lucky Emblems,” spread out across the various worlds. Some being more obvious than others. Many Disney Fanatics will go out of their way when visiting Disney theme parks to discover all of the Hidden Mickeys in rides, shows, places to eat, and hotels (To cash in on this, Disney Books has released multiple editions of their book “Hidden Mickeys: A Field Guide to Walt Disney World’s Best Kept Secrets” to constantly update fans about where to look to find the newest set of Mickeys just waiting to be discovered). Now, Square Enix has brought the challenge to their game where players will have to fight their way through hordes of heartless and align the emblem at just the right angle just to get a photo to complete a side objective.

One of the most impressive aspects of the “Kingdom Hearts” games have been the voice-actors. “Kingdom Hearts 3” is no exception. The roster of talent includes: Haley Joel Osment, James Woods, and Jesse Mccartney. The voice-acting should be good considering players will hear conversations between characters a lot. Because there are so . . . many . . . cutscenes. This is “Kingdom Hearts 3” ultimate downfall. While the “Kingdom Hearts” games have always featured many cutscenes, they were short and separated by long periods of exploring and battles. In “Kingdom Hearts 3,” however, there are times where it felt like I hadn’t picked up a controller in ten minutes, only to be able to finally play and walk down a hall for five seconds and then have to sit through another cutscene.  For some, this may not be an issue. There are plenty of games that have come out before that were much more like interactive movies, for example, “Mortal Kombat X,” “A Way Out,” and “The Order 1886.” For others, this might test their patience, testing even the most devout Disney fans.

In the end, “Kingdom Hearts 3” is a satisfying conclusion filled with epic battles, Disney nostalgia, and some moments of extreme meta humor also thrown into the mix. With the only detractor being a gargantuan amount of cutscenes that makes the game less enjoyable but still worth the money nonetheless.