SERVING THE PUBLIC AT PUBLIX 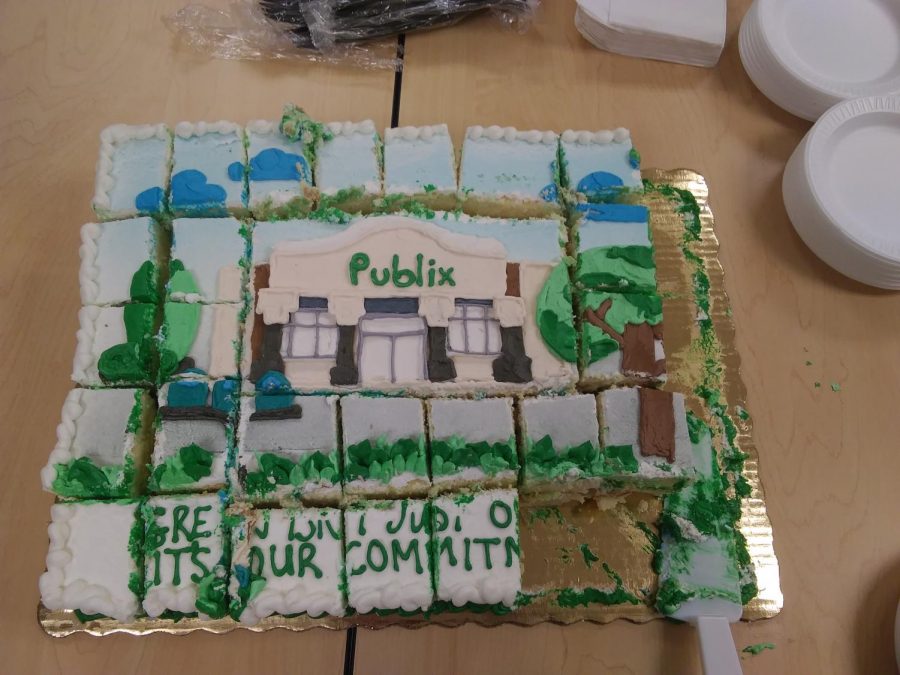 I spent most of my summer last year looking for a job so I could save some money for my trip this upcoming summer. I had trouble finding much, as I was still fifteen at the time. After some research, I learned Publix hired as early as fourteen, so I asked around the East Brainerd location for information on where to apply for the new store (that was still under construction at the time), and someone told me there was a hiring event that day at Patriot Hall in Ringgold.

I went straight there and filled out an application alone of the several computers against the wall. There were cookies (Publix brand) and drinks out on a table near the door and a video about the life of the company’s founder, George Jenkins, playing on repeat. The application included a lengthy test on what I would do in certain situations, most of which involved customers. I never found out what I scored on it, but I must have passed because I got a call back the next week for an interview.

The interview was also at Patriot Hall. I got stuck in traffic on the way and got there just on time at 2:45. There were five or so interviews going on at any given time, and the man doing mine shared my last name, Morehead. Before then I’d never met anyone outside my close family with the name. We shook hands, and he asked me some questions about past occupations (of which there were none) and then about school and what I did there. I brought up the school paper and yearbook. We shook hands again, and that was the whole interview.

The week after, I went to the store in Ooltewah, where all the managers were preparing for opening in Fort Oglethorpe. I shook hands with the planned store manager, accepted the job, and was hired on at $10 an hour as a bagger.

For the next two weeks I did training on the computer and an orientation with a small group of other trainees. Most of what we were told was common sense, and centered around being friendly with customers. After that I trained practically at East Brainerd. I learned where everything I’d need was, who to talk to, and I got my shirts and aprons. The person who gave me my uniform messed up, and got me women’s shirts and stock clerk aprons.

My bagging training was just me working on the front end. Nobody showed me how to do it, they just said “do it.” I got the hang of it quickly and ended up good at it. I’ve been part of a bagging competition, and I’ve won two rounds so far. The state competition is in Atlanta, on a stage with an audience of a few hundred people.

A month later, October 10th, the Fort Oglethorpe/Ringgold Publix opened. The parking lot was always so packed that employees had to park at a seperate lot and take a shuttle. Opening was strange and most people were stressed and/or uncomfortable with the new building and different co-workers(the trainees were split up between three nearby locations).

In November, I looked at my schedule and one shift’s position was labeled “Produce Clerk.” I was out of my mind confused, and when I went in, someone explained that the department needed help and my manager had picked me. I had so much fun in Produce, stocking, arranging, grading, and pulling fruits and vegetables. I felt more in my element there. I’m always scheduled there, and once I ran it and closed it for the night by myself.

After that I was trained for Grocery, which usually consists of blocking cans and boxes for nine or ten hours in a day. Then I was trained to cashier, and that tends to be my least favorite because handling other people’s money stresses me out. Recently I got a raise to $11 because of my versatility and how much I contribute to other departments.

Working at Publix has brought me close to a whole bunch of customers and associates that I would never have known without being there. I can confidently call those people my friends. I’m more sure of myself and my social skills are more rounded. My favorite part of being there is how often I can make people smile, even if it’s at some small grocery store in a small town.