Third Time’s Not The Charm 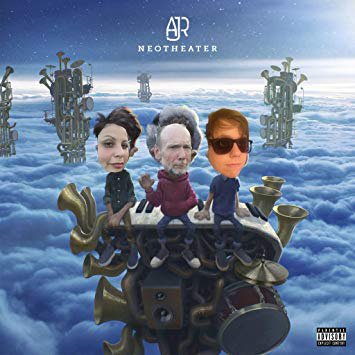 “Neotheater” had been teased for mother before its release. Lead singer Adam Met and team decided to ride off the back of the popularity of their previous album “The Click” in order to get fans hyped for the next release. But this didn’t mean they wanted a repeat of what had made them famous. The band wrote many songs that could have possibly gone with the theme of “The Click,” but only after many failed attempts and completely throwing away a half-written album. Their decision to revamp and add crazier and more intense music succeeded and fans went wild, buying 32,000 units and making this their first Top 10 release ever.

The album itself is constructed of stories and experience from the band members themselves about growing and experiencing life. Songs like “Birthday Party” are written from the perspective of a child, being excited and optimistic about life. But writers within AJR didn’t hold back on their opinions of today’s society with lyrics like “Bet my ignorance is always bliss / Except ignoring pigment in our skin / I bet my country’s nice to immigrants / And that’s just how it is.” I mean, how controversial yet so brave.

AJR combines lyrics like these with strong back-up vocals and entertaining electronica background music. Songs such as “Next Up Forever” pair formal male choral voices with a strong electronic hit—a strange mix but it comes with its positives for those who enjoy this type of music. The brothers used mics from the 1940s in order to recreate that old style of recording, giving this specific song a classic feel before slapping you in the face with intense, battle scene-like hits that can make anyone nod their heads to every beat.

“Dear Winter’ is another popular song on the album. Unlike the rest though, instead of crazy fast paced-music it has a softer tone. Ryan Met wrote the song, letting his brother Jack take the helm on singing it. Ryan’s lyrics express his deep love and concern for his daughter that doesn’t even exist yet. Jack’s soft tone followed by instrumental music changes the flow of the album.

For most music listeners, AJR’s music is a little too influenced by basic pop culture for it to be alternative. But those who are fans enjoy their music no matter what category it’s in.