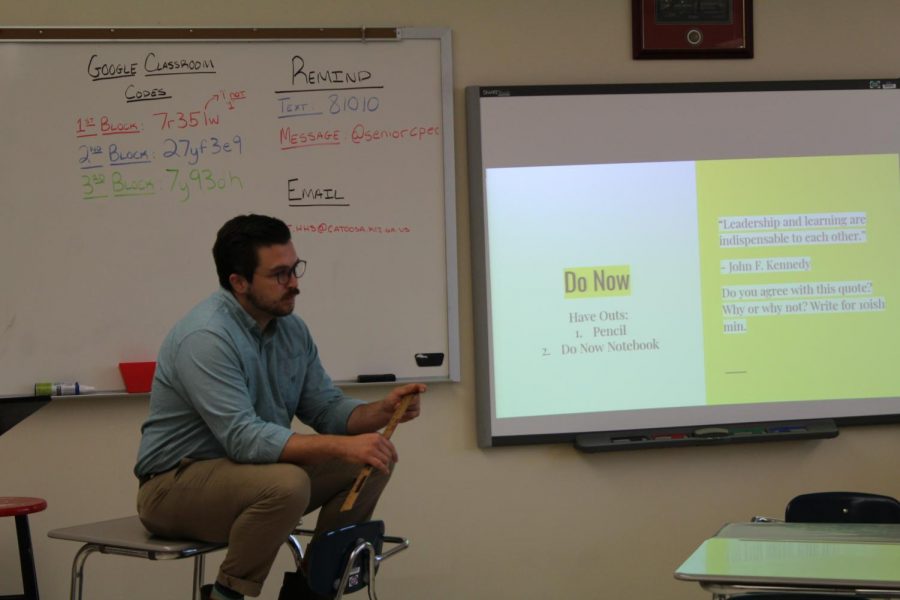 This year Heritage High School has brought in a new crew of teachers who are expecting amazing things from the school’s students. However, one of these new teachers actually graduated from Heritage High School not too long ago. Meet Michael Moore or, as most of the students would call him, Coach Moore.

Coach Moore is a new Social Studies teacher who’s influenced by all of his teachers including “Mr. Trobaugh, Mr. Terry, Mrs. Lane.” He has high hopes that he can live up to the Social Studies standards and be as great as his influencers, including his Mom. The decision to become a history teacher was not his initial intention: “I did not want to be a teacher until my junior year of college,” he said. This being said, Mr. Moore is now on his third year of teaching, but he did not spend the other two years at any neighboring school or even one of the schools scattered around Georgia. “I taught for two years in Texas at a school called Chinquapin,” he said. “It is a small prep school right outside of the Huston.” He explained the differences of both schools: “Chinquapin has grades 6-12th and has around 150 student. Coming back to teach at Heritage was a whole 180 for me.”

Considering Coach Moore was into wrestling and became part of a team in college, he felt the need to coach Heritage’s wrestling team this year. “I also coach soccer, even though I know nothing about soccer so, that will be fun,” he said. It is quite interesting that he chose soccer because, as he said, “Pete is definitely my mentor.” For those who are unaware, Mrs. Peters, Heritage’s very own Art teacher, is the girls soccer coach. Mr. Moore also has a few teacher best friends that he was willing to share: “If I don’t say Mrs. Peters, she will slap me, but I would also say Mr. Trobaugh, Mr. Terry, and Mrs. Zipp.”