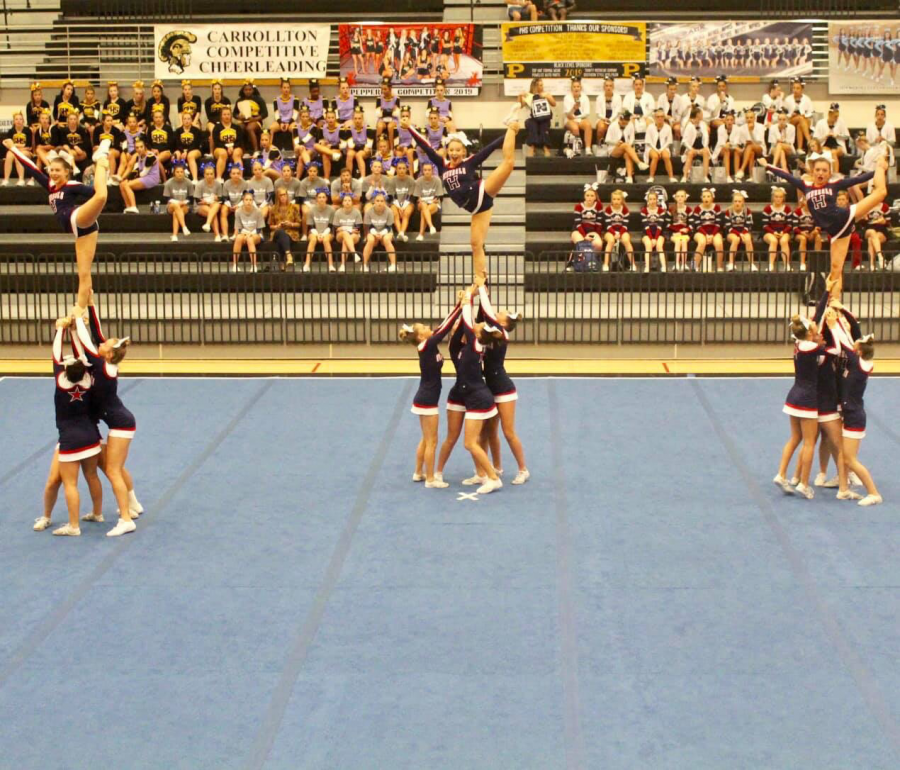 To most, starting off their Saturday at six-thirty in the morning isn’t their ideal vision of “fun.” However, that is exactly what our cheerleaders did last Saturday in order to make their way to Adairsville.

A bus took them on the hour-long trip, where most either slept or watched Tiktoks. If someone were to look at the rag-tag group of cheerleaders, they might’ve thought it was Ringgold’s biggest slumber party ever because almost all of them were still in their pajamas.

Upon arriving at Adairsville High School, their coach, Meredith Burkett, checked them in, and they were led to the cafeteria where the other cheerleaders were. Now with only an hour to get ready, a frenzied flurry of cheerleaders rushed around, putting in last-minute bobby pins and bows.

Their warm-ups were set up a little differently, and Coach Burkett took more authority over it, counting out every standing tumbling pass thrown, making it a more organized ordeal. The competition was running about five minutes late, so they got a little extra time to perfect a few extra things.

On stage, our girls put on a show-stopping performance with no deductions and very few mistakes. Their new pyramid, which was redone less than two weeks ago, hit solidly with no bobbles. Of course, there is always room for improvement, and they are ready to take this week to focus on getting better and wasting no time on making easy mistakes.

Awards were a short affair, and once they got back into the gym, there were only three more teams to put on a show for the crowd. In total, eleven teams competed, of which five were in their division.

Out of those five teams, they got second, only falling by eight points with a score of 82.0. Central took first, but everyone seemed to agree that they deserved it because of how clean and tight their whole routine was.

Now that everything is said and done, each and every cheerleader is ready to put their best foot forward and keep trying to get better. They will showcase their routine this Friday at this week’s pep rally and will take it to Dalton High School the day after. That competition is much smaller, with only two other teams competing against them. All they hope for this week’s practices is positivity and progressiveness, so they will be prepared to go to Dalton.