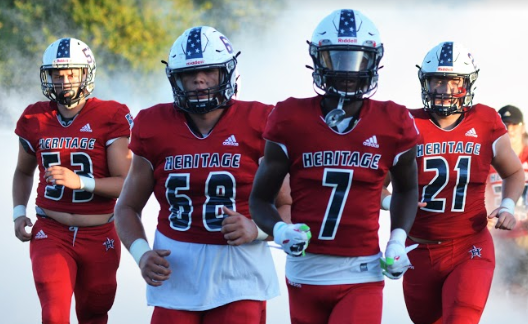 Around this time last year, the Heritage High School football team was 4-6 overall. Now, they are currently 7-2 overall, they are ranked 240th in the state, and 4,826th at the national level (stats courtesy of Coach E.K. Slaughter). Many eventful things have gone down this 2019-2020 season, starting of course with the infamous game versus the Ringgold Tigers.

The Ringgold/Heritage game is consistently the most attended football game each year, considering the two schools are huge sports rivals. Last year their team pulled a win out on us, but that was not the case this year. Heritage won by roughly 3 points, and coaches say they’re looking forward to another win in the future.

Despite the great news about Ringgold, the team did unfortunately take a close loss to the Ridgeland Panthers, as well as Pepperell. Our Legion of Generals had an accident between a bus and another car before that game as well, and some of the players made some comparisons between that and the game they played the same night. Sometimes we need a little more on our side than luck.

Unfortunately the 2019-2020 football season is coming to an end. Many well known seniors are happy to say that this is their last season, since they did have a very well played period. As anyone would be though, we can all guess they will definitely miss it. Sean McNulty elaborates, “I was impacted most by coach Slaughters view points on leadership, and how we should be strong men and be good representations of what a man should look like. It was a great season.” Our Emperor of the Taj, Maddox Rose, also says it was a great season to be a senior.

When asked what he learned the most from this season, Dereck Gibson explains, “It has really taught me a lot about brotherhood. I grew up without any brothers, and I have made some very special bonds throughout my years in football. During my freshman and sophomore years, I learned from the older guys how to conduct myself on and off the field. The team has really taught me to be a better man.” He continues, “My proudest was definitely beating  Ringgold in a dominant way, which we have never done before. I also play alongside some really talented guys, and it makes me proud when watching what they can put together in just one week.”

As shown by the obvious, this was a great year for the Heritage Generals. Hopefully the upcoming freshmen, sophomores, juniors, and especially seniors, can hold on to the legacy and luck this team has left behind.