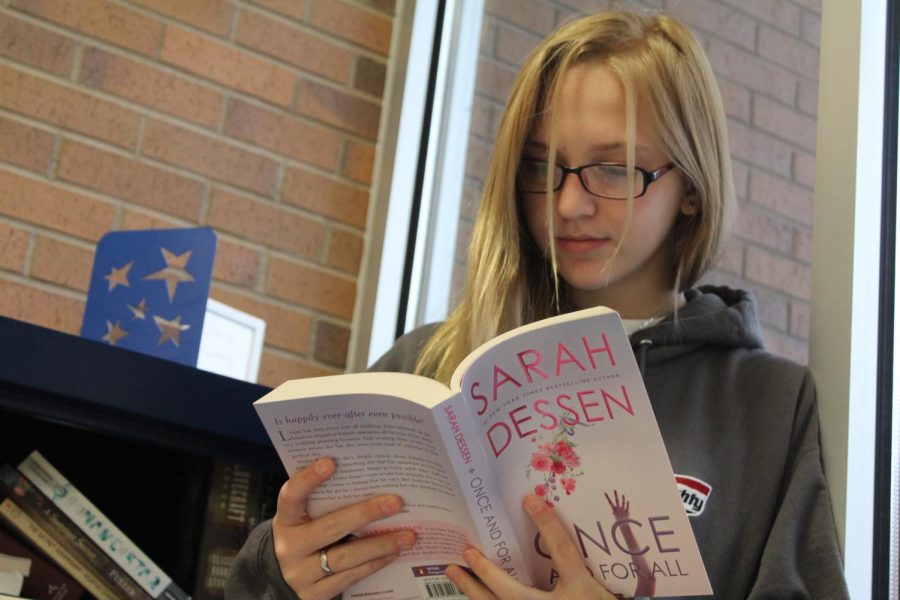 “What keeps you up at night?” That’s what I asked Heritage High School sophomore Amanda Strickland when I sat down with her for an interview. I was expecting the usual answer – “spiders” or “snakes” or maybe “crippling debt” – but, no. The response I got was… something else. Something . . . interesting. It was her phone.

Who is Amanda Strickland? What was she all about? I set out to answer those questions and more this past week when I sat down and talked to her. But first, I wanted to get to the nitty-gritty and get to know my interviewee.

I asked Amanda about her favorite activities and hobbies. “Art and puzzles.” There was a slight pause before she spoke up again, “. . . and writing.” I asked her if that was the reason she was in Journalism this semester. She said yes. I then asked her what her favorite school subject was. I was expecting to hear English Language Arts, but instead, Amanda threw me a curveball: “Math.” I was more-or-less surprised. I guess she saw it in my face because she added onto her answer. “It’s just that I’ve always had a knack for math.” At this point, I made a note about Amanda, and that one thing was that she was full of surprises.

Another one of the things I asked of her was to describe herself in five words. Instead of giving me a sentence, she gave me five terms: “crazy, weird, outgoing, adventurous, and kind.” Weird? I thought. Why call yourself weird? “A lot of people have called me weird,” she said, “and I think the weird can have its own definition . . . so weird can be one thing to me and another to you. We are all weird in some way.” I smiled after she gave this answer, for her words on the matter sort-of struck a chord in my heart. I distinctly remembered back to my childhood and the following phrase: “weird is normal; normal is weird.” Shortly after, I asked her what was something she wanted people to know about her that they might not already know. She thought for a second before answering. “Well, I’m very helpful at times, so if anyone has an issue, I would try to help you out in any way possible.”

The selflessness that Amanda showed in her answer was very moving. One would be hard-pressed to see anyone like that nowadays, so it made an impression on me. In fact, it made so much of an impression that I had to know who her inspiration, her muse, her idol was. “My mom,” she answered. “She’s been through a lot, and although she has some scars, she still manages to keep going. It gives me the inspiration to keep going too.” So inspiring! The way Amanda talked about her mom moved me. The fact that she said her mom still wears her “battle scars” from her own battles was very moving. Being moved this much reminded me of what moves me a lot in general: music. Therefore, I asked her about her favorite song. She smiled a bit when she answered, “‘Champion’ by Carrie Underwood.” I hadn’t heard of the song before, so I asked her why it meant so much to her. She told me that the song gave her the motivation to move forward, and it made her realize that sometimes she may fail along the way. The fact that someone can interpret just one song in such a matter is simply inspiring, and it makes me happy to see that I’m not the only one who is like that.

For our final question, I asked Amanda what plans she had for the future. She told me she was planning on going into the military to become a “JAG” lawyer. I had never heard the term, so I asked her to elaborate on the job. “JAG lawyers are military lawyers. Say a soldier gets a charge against them; JAG lawyers defend them, so that they don’t run the risk of hiring a lawyer who knows next to nothing about the military. In other words, JAG lawyers are trained to know the ins and outs of the military.” She continued to discuss her future plans. “I also plan on doing my 4 years of college online, and, after I retire from the military, I want to find a house and maybe a small job.” It sounded like a solid plan to me.

Amanda was interesting to talk to. I personally don’t get to talk to many people outside of my close-knit group of friends, but I was glad to have talked to her. The way she goes about and views life are both interesting in their own rights. The way I see it is that we both see life in sort of the same way – somewhat neutrally (if not leaning towards optimistically), but with the knowledge that turmoil could be around any corner at any point in time. After reading this, I hope you got to know a bit more about Amanda yourself. Maybe, just maybe, you are up on your phone reading this now. I for one did learn more about Amanda, and I was not disappointed.